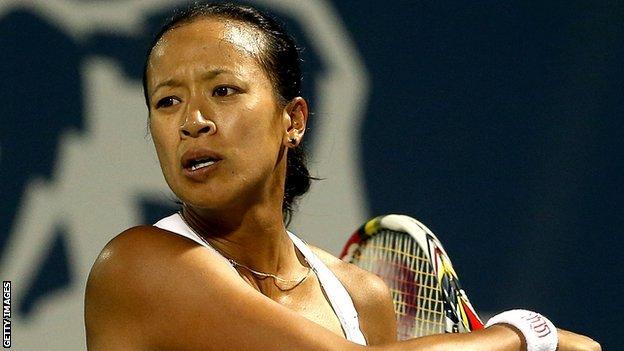 British number one Anne Keothavong and Heather Watson are both out of the Bank of West Classic in Stanford.

Watson was beaten by the world number 37 Yanina Wickmayer in the second round on Wednesday.

Belgian Wickmayer beat Watson in three sets, winning 5-7 6-1 6-4 to book her place in the third round.

Burdette, 21, will next face second seed Marion Bartoli, while Keothavong is to represent Team GB at London 2012.

Wimbledon champion Serena Williams beat wildcard Nicole Gibbs, 19, who was ball girl during a Williams match seven years ago, 6-2 6-1 in the second round.

Afterwards Williams said she was struggling with jet lag after returning from England.

"I couldn't quite believe I was playing today," she said. "But I'm healthy and I have a heartbeat so I didn't have a reason not to.

"I definitely felt sluggish and it was good to get the win over with. I'm still waking up at 2am."