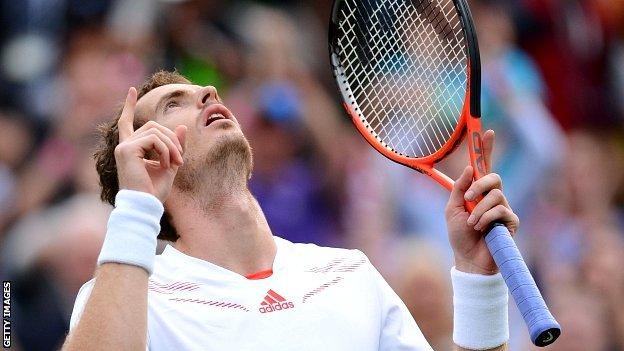 Andy Murray has set his sights on a first Wimbledon final as he prepares to meet Jo-Wilfried Tsonga on Friday.

Murray performed superbly to battle past David Ferrer in Wednesday's quarter-final and is priced at 1-2 by some bookmakers against the Frenchman.

The British number one and fourth seed said: "I've had a good run here the last few years, but I'm not satisfied with that. I want to try to go further.

"It's been a good tournament so far, but I want it to continue."

Path to the last four

He added: "Everyone kept telling me I had such a hard draw and how tough it was going to be to get through, but I managed to do that - I've beaten some very good players."

Murray has been beaten in his last two Wimbledon semi-finals by Rafael Nadal, who crashed out in the second round of this year's tournament to Lukas Rosol.

But the Scot insisted the absence of the two-time champion did not make his last-four task any easier.

"Just because I lost to him [Nadal] a few times doesn't mean I'd never want to play against him - I don't mind playing against Rafa," he said.

"I've won against him in Slams before. It's obviously a challenge, and he's played some very good tennis when we have played each other here."

"He served I think very well so far this tournament. It's a very different match to playing against Rafa, but he's one of the best grass court players in the world, that's for sure."

This year it is Federer who will meet current Wimbledon champion Novak Djokovic in the other semi-final, leaving Murray to play his lowest-ranked semi-final opponent at Wimbledon since he lost to number five seed Andy Roddick in 2009.

"I think when I played Roddick in the semis that was also a good chance," said Murray.

"I had a good record against him before I played against him. He did play unbelievable in the semis, and especially in the final that year.

"I'm in a good position, that's for sure. Whether it's the best chance or not, I'm not sure. But I've been in this position a few times now and want to push on."

Tsonga's only victory over Murray in six matches came at the 2008 Australian Open, but the Frenchman remains optimistic this time around.

"It's of course an advantage to play at home but it's still tennis and you never know what will happen on court," he said.

"Andy's one of the players I don't like to play because he's returning really well and he can play some really good passing shots.

"He's really quick. He's all the time on the ball, so it's tough for me. But I beat him once and last time we played together on grass [at Queen's in 2011] I had a match point and it was really close.

"I will have a chance. Maybe less than him, but I will have some and I will try to take it."