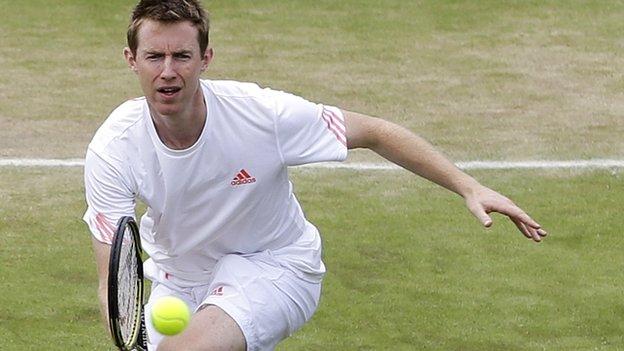 Mark Cox had been the last Briton to reach the last four in 1977.

"This is by far the biggest week of my career. It's a huge deal for me," said a delighted Marray.

"I've been playing at Wimbledon for a decade now and to get this result is just massive.

"I think you can probably tell by how we reacted at the end of the match just what it means to us to have got through.

"I remember watching Wimbledon on the TV when I was younger and now here I am into the semi-finals with Freddie. It's a really special moment."

Colin Fleming is in the mixed doubles last 16 after knocking out Aisam-Ul-Haq Qureshi and Andrea Hlavackova.

Scotland's Fleming and partner Su-Wei Hsieh, from Chinese Taipei, saw off the seventh seeds 6-3 6-7 (5-7) 6-1 to set up a meeting with Dominic Inglot and Laura Robson in the third round.

Sheffield-based Marray had never been past the third round in his previous 10 attempts in the doubles.

The second set of his match was interrupted when American Cerretani needed treatment for a problem with his left leg after a slip on the turf.

But after their opponents resisted five break points, Marray and Nielsen secured the set via a second successful tie-break.

After losing the third, the pair then went 4-1 down in the fourth before winning just one more game in the set.

But they fought back in the decider, breaking their opponents twice before Marray successfully served for the match.