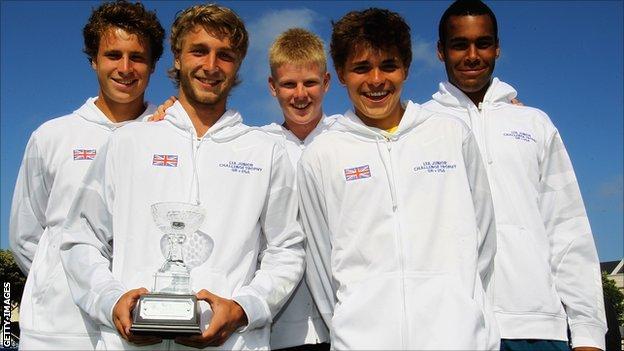 Liam Broady and Luke Bambridge lost in the boys' last 16 while Katy Dunne was the only girl to reach round two.

"At the Junior US Open we had three of the four semi-finalists and we've just won the Junior Davis Cup."

"Our talent development programme is now one of the best in sport so that's why we are getting good results. We need a little bit of patience but we're making good progress."

This week the former Sport England chief executive has been promoting the LTA's Allplay tennis scheme, which is aimed at introducing more people to the sport by making them aware of their local courts.

And former British number one Andrew Castle believes getting more youngsters involved in the sport is key to developing British talent.

"I want to see more people playing and not worrying about middle management goals and ambitions, not stopping the kids and talking about having a laugh, learning on the job. Just play," he said.

"Some of the things that are being done now are absolutely spot on. What it really comes down to now is who they've got finding kids in the first place.

"If you're poor, it's not easy [to reach the professional game], I would say it's nigh on impossible. Tennis is still a middle-class game in Britain.

"Allplay is brilliant, it's making tennis attractive to youngsters but there's been an awful lot of five-year and 10-year initiatives, an awful lot of blueprints and plans, so please forgive my cynicism."

"My major concern is the age of 16 to 20 when people are learning to be adults," he added. "Forget being a tennis player. If you're playing an individual sport professionally, travelling to 35 countries over 35 weeks, you'd better be organised, grown up and somebody that takes responsibility and understands that this is a one-shot deal.

"The people that are around you need to help you with that, this is why the American College system is fabulous because when you come out at the other end, at 21-22 you get it.

"Also our kids from 15 or 16 must take responsibility and understand they can actually do it."

"We're very fortunate in the men's team to have a resource in Greg Rusedski, who can give us very detailed, precise and processed thoughts about what the boys are facing," he said.

"Greg is a very important resource and I work very closely with him on developing these boys on the famous transition.

"First of all we must know what the journey is, second of all prioritise physicality and thirdly get the schedules right.

"We feel like most countries that playing on clay courts helps develop the physical and psychological attributes needed. Rallies are longer, the countries where clay court events are played are usually hotter, it's more skilled, it requires patience, fighting spirit, determination."

And Weston believes the current crop of junior boys have potential to succeed at the highest level.

"They tick boxes, there's winning going on with these boys," he said. "That's one very encouraging sign, Junior Davis Cup winners, finishing first is what's supposed to happen, that's what we work for, so that's a start.

"They have game identity so they know how they want to play and they're really working on their games as opposed to just trying to play any way they can.

"We're very clear on their identity as players, the strategies they are going to use, the way they are going to play. We feel confident that we've got the right group and they'll have every resource that we can provide them."

Using the experience of current and former players is another way that the LTA are trying to develop the juniors.

"We have dovetailed the senior and junior team into each other. There is no division between the two," added Weston.

"We have also exposed them to people that have been successful - Greg Rusedski, Tim Henman and Andy Murray - and tried to raise the expectation levels. I hope amongst the boys there is an expectation that when one of them walks on the court that they're going to win.

"I think as players move through the age groups they should start to be more self-sustaining and our tournament bonus scheme has kept players like Josh Goodall and Jamie Baker able to have careers based on rewards from their own achievements.

"So rather than being given just blanket funding and off you go, they earn it. It is very difficult and the public at large don't really appreciate that outside the top 100, players are still extremely good but it's very difficult to make a living.

"If a player does well at Futures level we will top up their prize winnings to help them reinvest in their own careers. We are very much looking to create not an environment of entitlement but an environment of reward and self-sustaining."