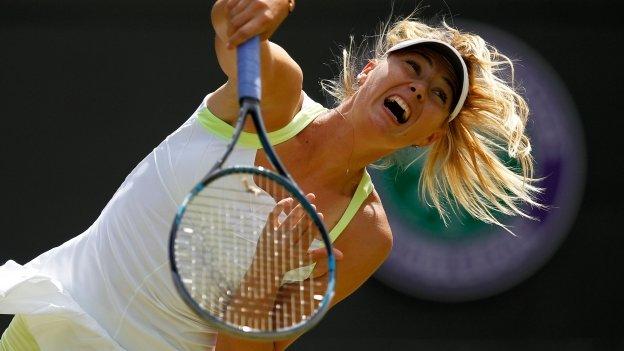 Maria Sharapova eased into the fourth round at Wimbledon with a 6-1 6-4 victory over Taipei's Su-Wei Hsieh.

The Russian world number one broke Hsieh three times in the opening set, winning it with a crunching forehand.

Kim Clijsters is also through after a tearful Vera Zvonareva retired while trailing 3-6 3-4.

The Russian, who lost in the final to Serena Williams two years ago, appeared to be having breathing difficulties and left the court for a medical timeout during the second set but returned to continue.

However, after losing her serve, she conceded the match.

Clijsters, who has twice reached the semi-finals, told BBC Sport: "I heard her coughing a lot and after long rallies it took her a long time to recover.

"She's a fighter - we've had some really tough battles, so it's sad to see her have to pull out.

"I'm excited that I made it into the second week," she added. "A week ago I don't think I was expecting that, so I'm very happy with the way things have been going.

"[My injury is] stable. It hasn't got worse since my second and third match so I'm happy about that."

Next up for Clijsters is German eighth seed Angelique Kerber who reached the fourth round for the first time with a 6-2 6-3 victory over Christina McHale of the United States.

Earlier on court one, Sharapova battled gusting winds to reach the last 16.

The 2004 champion's high ball toss was affected by the conditions and the reigning French Open champion was broken twice by Hsieh in the second set but she responded well from 4-2 down to win the next four games.

"She was a tricky opponent," conceded Sharapova who will next play Germany's Sabine Lisicki.

"She changed the pace really well and her serve is really tricky. The conditions were tough, I had to face a lot out there and be patient.

"The wind was tricky but I knew I had to handle it."

Lisicki, who was beaten by Sharapova in the semi-finals last year, defeated Sloane Stephens of the United States in three sets 7-6 (7-5) 1-6 6-2.