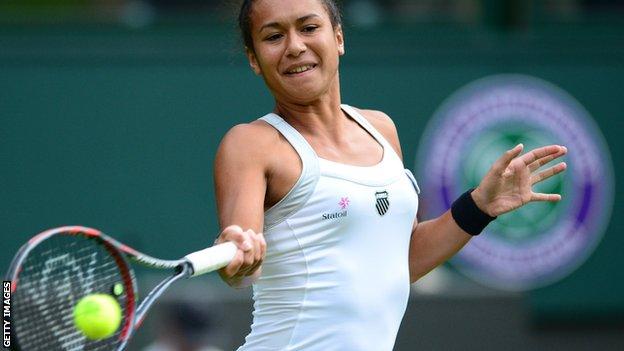 Great Britain's Heather Watson says she is not satisfied with her Wimbledon performance as she prepares to meet Jamie Lee Hampton in the second round.

Watson earned her maiden win at the All England Club with a straight-sets success over Iveta Benesova on Monday.

"I'm looking to go deep into the tournament and not settle for one win," said Watson, whose match is first on Court Two on Wednesday.

Roger Federer,Novak Djokovic and Maria Sharapova are also in action.

Number one women's seed Sharapova faces Tsvetana Pironkova in the second match on Court One.

Watson played on Centre Court late on Monday evening and became the first British woman to win there since Jo Durie in 1985.

Her success booked her an encounter with American Hampton, conqueror of 27th seed Daniela Hantuchova in round one.

The 20-year-old Briton won her only previous match against the world number 100 in Auckland last year for the loss of only three games.

"I'm very pleased with my first-round win, but I'm not satisfied with just a first round," said Watson, one of five Britons across the men's and women's draws to make it to the second round.

"I think winning these matches in the Slams is giving me more confidence, making me want to go deeper into the tournament, and I'm gaining a lot of experience and learning a lot from it."

In the men's tournament, Xavier Malisse,Janko Tipsarevic and Nicolas Almagro will bid to reach the third round.