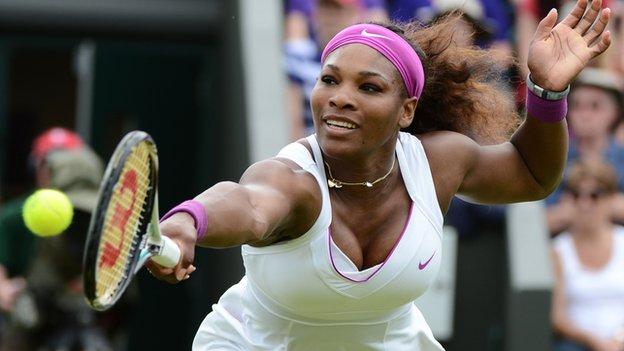 Serena Williams was made to work hard for her Wimbledon first-round win over Barbora Zahlavova Strycova.

The four-time champion, whose sister Venus was beaten on Monday, had few problems in the first set but was broken twice in the second.

The sixth seed recovered to seal a 6-2 6-4 success to join defending champion Petra Kvitova in round two.

Kvitova, 22, fought back from a shaky start to beat Uzbekistan's Akgul Amanmuradova in straight sets.

The Czech was broken in the first game of the match by Amanmuradova but eventually regrouped to win five successive games.

The second set was also tight, but a single break was enough for 22-year-old Kvitova to seal a 6-4 6-4 win after a 25-minute delay for rain. She will meet Britain's Elena Baltacha in round two.

"It's unbelievable to come back here as defending champion, some nice memories came to mind," Kvitova told BBC Sport.

"In the beginning I was really nervous. In the first match on grass it's always tough to know what to expect, but I tried to play my game and go forward."

Williams, meanwhile, will take on Hungarian qualifier Melinda Czink for a place in the last 32.

Playing on the same Court Two where Venus perished on Monday, Serena broke her Czech opponent three times in the first set.

Breaks were traded in the second before Williams converted her second match point in the 10th game of the set.

"It always has some sort of an effect," said Serena of her sister's loss. "I always want to play even better if she's out of the tournament.

"She [Zahlavova Strycova] was being real aggressive and hitting lots of dropshots and coming to the net.

"It was good. If I ever play anyone like that in the tournament, it was a great opportunity for me to play her like this."