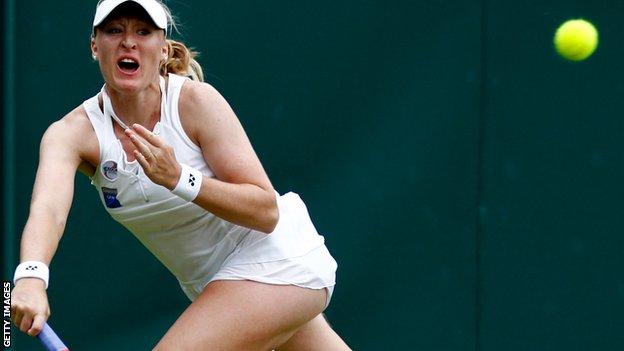 "Baltacha has always had the fight and the heart and that was a huge win for her. Any time playing on your home soil in a Grand Slam, which I had to do at the US Open, it's a big deal, what with the pressure and there not having been a champion for quite a while. But she's always going to give it her all, she's fun to watch."

They will be joined by Andy Murray who comfortably beat Nikolay Davydenko.

The British number one needed just over one hour and 30 minutes to beat the Russian 6-1 6-1 6-4 to set up a meeting with either Israel's Dudi Sela or Ivo Karlovic of Croatia.

The quartet's victories, along with Heather Waton's opening-day straight-sets win over Iveta Benesova, made it the best showing for British players at Wimbledon since 2006, when seven players progressed to the second round.

Laura Robson missed out, however, although she did give Francesca Schiavone a scare before falling 2-6 6-4 6-4 to the former French Open champion.

Robson was leading by a set as the experienced 24th seed Schiavone had a medical time-out, and the 18-year-old Briton also had break points in the second set.

"I thought I was in control of it, and then just made a few mistakes and let her get back into the match," said the British number four.

"Schiavone had a little bit too much variety for Robson but Laura has a game where, even though she's in the top 100, she's going to have to take that next step. A lot of that will have to come from herself, wanting it and working hard, and also believing she's got the game. With her strokes and her serve and her being left-handed, she needs to start putting the tools together. She should watch Kvitova and try to emulate her.

"She's not the best mover but she takes advantage of her lefty serve and she goes after her shots, doesn't second guess herself and sometimes comes up with a lot of errors. But she doesn't just get balls in, she goes for it."

Baltacha, who was informed on Tuesday that she had been awarded a wildcard to represent Britain at London 2012 in the women's singles, admitted it had been an emotional day.

"I didn't know [about the Olympic wildcard] until Judy [Murray] told me at the end," said the 28-year-old, who was hampered by a hip problem during her first-round win.

"If I had have known, I would have been all over the place and crying my eyes out."

The world number 101 will next play defending champion Petra Kvitova and said she was a "very happy girl".

"I will always remember the moment I found out I was going to be an Olympian. You're talking about the elite people in sport in the whole world," she added.

Keothavong, who next plays Sara Errani of Italy: "I made it a little difficult for myself at times but I felt like I settled into the match well, and I never felt I was going to lose - it was just a case of getting the job done.

"I've played against Errani before and she'll be a tough opponent. I'll have to do things better if I'm going to have a shot. Everyone is beatable on any given day."

Ward savoured the best moment of his career to shock Andujar, who is ranked 137 places above him.

"Grass isn't Andujar's favourite surface, but he's 36 in the world and wins titles on clay for fun."

British wildcard Johanna Konta, 21, could not cause an upset on her Wimbledon debut as she lost to 30th seed Christina McHale in a marathon encounter.

The match had resumed at 7-7 in the third set after bad light had forced them to stop on Monday.

The 21-year-old received huge support on Court 17 during her defeat, which spanned two days and lasted three hours and 10 minutes.

"I had good support, it was good to hear them and from what I heard I think they embraced me," Konta said.

"I feel British and I am happy to finally have GBR next to my name. People who are in touch with tennis will have seen my name around for the last few years. I very much hope that I have been accepted now."

James Baker will resume his first-round tie with Andy Roddick on Wednesday after play was suspended because of rain with the Briton trailing 7-6 (7-1) 4-2.