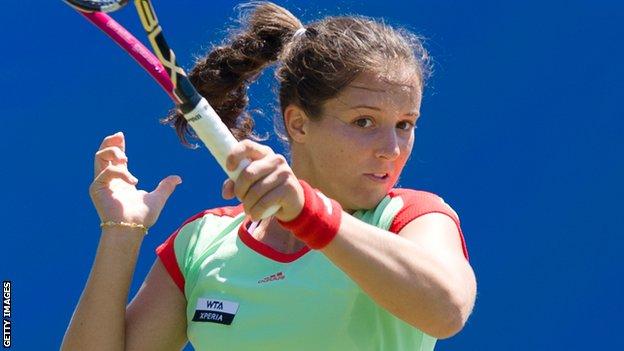 Laura Robson says she is happy with her game heading into Wimbledon but is refusing to set herself any targets.

The wildcard and ex-junior champion meets 2010 French Open winner Francesca Schiavone in round one on Tuesday.

"Last year going into the tournament I didn't feel like I was playing that well. I've had a few more matches this year on the grass already and I'm happy with my game heading into Wimbledon."

Robson, who has been backed by Great Britain Fed Cup captain Judy Murray to make an impact this year after moving within reach of a place in the top 100 for the first time, says she is now accustomed to the attention she first courted after she won the junior title at SW19 at the age of 14 in 2008.

"It was definitely pretty crazy after I won the juniors at Wimbledon," she added. "It was quite overwhelming to be a 14-year-old and having people outside my house all the time but I'm used to it now.

"I don't really take into account anyone else's expectations and try focusing on training as hard as I can and doing my best on court. I would say I'm pretty used to the attention now, especially during Wimbledon."

As a resident of Wimbledon, the teenager says she now "feels like a local" around SW19 and insists she has tried to keep life as normal as possible since her rise to prominence at such a tender age.

"I'm still at home," she said. "I still do the same things - I travel a lot with my tennis, still practice a lot, play a lot of tournaments, it's really the same.

"Whenever I'm home I spend a lot of time with my friends, catching up on everything and when I'm away I'm with the girls I know from tennis - I'm doing okay.

"I've missed a few concerts and parties but I absolutely love playing tennis and wouldn't change anything."