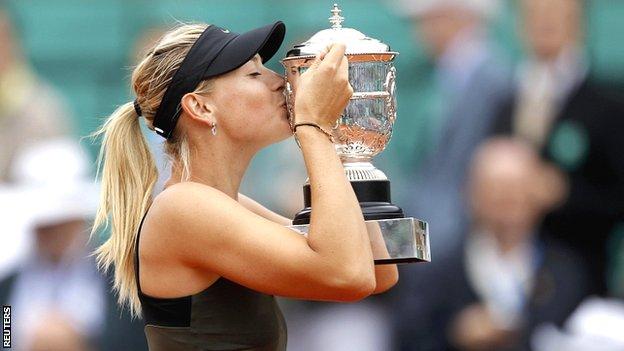 Maria Sharapova blasted her way to victory over Sara Errani in the French Open final to become only the 10th woman to complete a career Grand Slam.

Sharapova, 25, claimed a one-sided 6-3 6-2 win to add to the Wimbledon, US Open and Australian Open titles from earlier in her career.

The Russian overwhelmed her Italian opponent, who was playing in her first Grand Slam singles final.

Sharapova's run in Paris has also moved her top of the women's rankings.

At a time when the women's game is lacking a dominant and consistent figure, Sharapova provided more evidence that she is capable of filling that vacuum.

Since she was last world number one in June 2008, the top ranking has been held by eight different players and changed hands on 15 occasions, while the last six Grand Slams have been won by six different women.

Sharapova, who has battled back from shoulder surgery that threatened her career and severely disrupted her serve, produced a display of power and precision which will now see her head into Wimbledon as a strong favourite.

She and Errani had never met before and, while the Russian was the clear favourite, her opponent posed a threat having won three clay court tournaments coming into the French Open.

But the Italian had her first two service games broken and struggled to handle the power of her opponent's game.

The Russian had lost her last two Grand Slam finals at Wimbledon and the Australian Open but was clearly determined not to slip up again.

Errani engineered a break back to register her first game but it was a temporary reprieve as Sharapova claimed a third set point with a backhand down the line.

Sharapova broke to love at the start of the second set and despite Errani drawing cheers from the crowd with some adventurous shotmaking, it was not enough to disrupt the second seed.

Errani had won the women's doubles title with Roberta Vinci on Friday and, after her semi-final win over Samantha Stosur, said she had to start showing greater belief against more illustrious opponents.

But the Bologna-born right-hander rarely looked like she thought she could overcome Sharapova and after wasting a break point in game four, she was broken again in game five.

Sharapova set up her third match point with a magnificent running forehand winner up the line, and converted it when Errani sliced a tame backhand into the net.

It was her first Grand Slam title since the 2008 Australian Open and she sank to her knees in celebration.