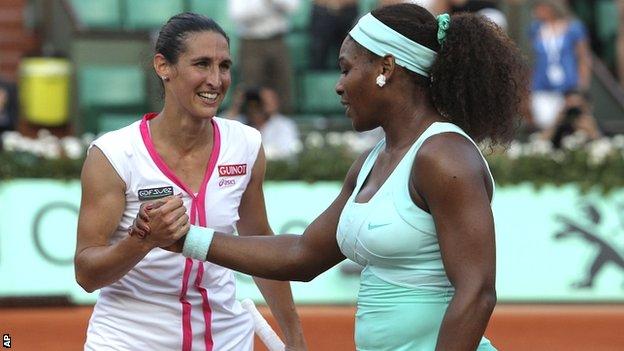 Serena Williams succumbed to a dramatic 4-6 7-6 (7-5) 6-3 defeat against world number 111 Virginie Razzano of France in the French Open first round.

It is the first time the fifth-seeded 2002 champion has lost in the opening round of a Grand Slam event.

"There is no excuse," admitted Williams after the match. "I made so many errors today. I just didn't play at all."

Second seed Maria Sharapova, who has never reached the final, beat Alexandra Cadantu 6-0 6-0 in only 48 minutes.

Williams was at the top of Sharapova's section of the draw and the two were expected to meet at the quarter-final stage.

But the 30-year-old American squandered a 5-1 lead in the second set tie-break and lost in three hours, three minutes.

Having lost six points in succession in that tie-break, Williams then conceded the first five games of the deciding set.

Razzano, who has never gone beyond the fourth round, was struggling with cramp and lost three games in a row, but in a 25-minute final game containing 12 deuces, the 29-year-old finally prevailed on her eighth match point.

"I just felt I couldn't get a ball in play. When I did, I just felt like I was hitting late and, I mean, how can you hit late on a clay court?" Williams said.

"I was definitely nervous, which I think is healthy, but there are no excuses."

A delighted Razzano thanked the boisterous home support at the end of the match.

"You [the crowd] gave me your energy. I'm gonna have to rest. Thank you all for your support," she said.

"I knew I had it in me and I dug deep inside myself to find it."

World number two Sharapova will next go up against Ayumi Morita of Japan, after she overcame Polona Hercog.

Sharapova, a semi-finalist in 2007 and again last year, has already won titles in Stuttgart and Rome this year and had few concerns against 22-year-old Cadantu, who has never beaten a player ranked in the top 60.

The French Open remains the only Grand Slam to elude Sharapova, who conceded only 18 points against world number 78 Cadantu, who did not hit a single winner.

"I feel like with every year I have improved and I enjoy it much more," the former world number one said. "I feel like I'm moving a lot better than I did in years previously, which has helped me a lot in the recovery process within the point."

The 21-year-old Dane, who is yet to win a Grand Slam, plays Jarmila Gajdosova of Australia in round two.

Wimbledon champion Petra Kvitova advanced with a comfortable 6-2 6-1 win against Australian wildcard Ashleigh Barty, the youngest player in this year's draw, who only turned 16 last month.

The 22-year-old fourth seed, who has never progressed beyond the fourth round at the French Open, will now play Poland's Urszula Radwanska, who beat Pauline Parmentier of France 6-4 6-3.

Krumm hit 15 winners, two more than 31-year-old Schiavone, but was guilty of 35 unforced errors as the 14th seed booked a second round encounter with Bulgaria's Tsvetana Pironkova, who came from a set down to defeat Yanina Wickmayer of Bulgaria 3-6 6-0 6-3.

Russian Anastasia Pavlyuchenkova, the 22nd seed, beat Greta Arn of Hungary 6-4 6-4 and plays Anne Keothavong's conqueror Melinda Czink in the next round.