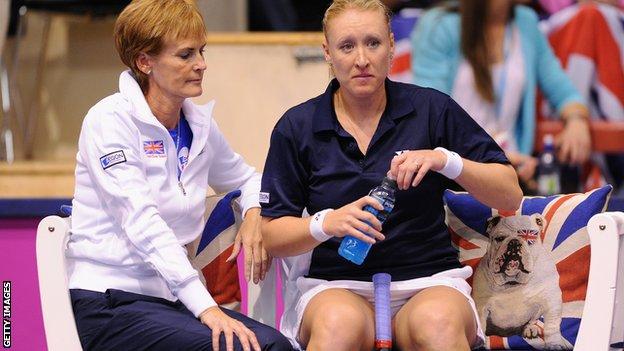 Baltacha was beaten 6-1 7-5 by Sweden's Johanna Larsson in the first play-off to be among the world's top 16 nations.

The power of Sofia Arvidsson then proved too much for Keothavong as she fell 6-1 6-4 in the second rubber.

"Sweden deserve their convincing lead after day one. Larsson and Arvidsson were both very solid and adapted well to a painfully slow indoor hard court. Baltacha and Keothavong both had their chances to get back into their matches but struggled for consistency. Captain Judy Murray now has to decide whether to stick with her experienced top two on the second day or throw in teenager Laura Robson. Heather Watson has a slight foot injury which would prevent her appearing in singles but won't stop her playing the deciding doubles, if it comes to it. That prospect seems a long way off at the moment."

Captain Judy Murray's side require a clean sweep of the reverse singles and a doubles rubber on Sunday to proceed.

"I have big decisions overnight," the Scot said. "I have four strong players on my team and I need to think about who would be best placed to play tomorrow."

Baltacha's effort to give Britain an early advantage in their push to reach the second highest level of the Fed Cup for the first time since 1993 was troubled from the off, as a succession of forehand winners from her 71st-ranked opponent saw her break for 2-0 in the first set.

Some encouraging words from Murray seemed to inspire a much-improved display from the British number one in the opening games of the second set before a series of sharp forehands from Larsson forced the critical break in the 11th game.

The 63rd-ranked Baltacha said: "I'm really disappointed. It's a team event and we're all here for the team, but there's no going to the corner and sulking."

A crushing display from the baseline saw 54th-ranked Arvidsson win the final six games of the first set after a deft lob from Keothavong had given the British number two an early break.

The disparity between the players was less evident in a rollercoaster second, but 79th-ranked Keothavong could not stop Arvidsson completing a dominant first day for the hosts.