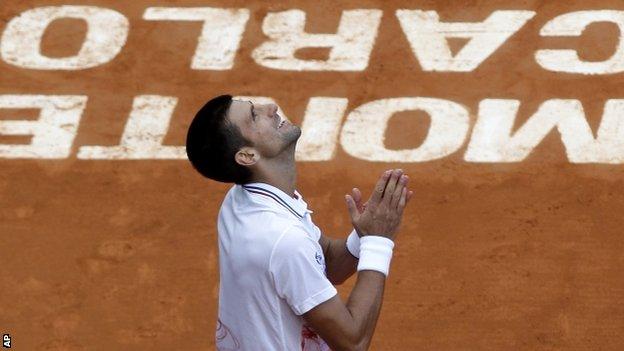 Novak Djokovic is into the Monte Carlo Masters last eight despite suffering the loss of his grandfather just hours before playing Alexandr Dolgopolov.

World number one Djokovic overcame his Ukrainian opponent 2-6 6-1 6-4 after turning the match around with a break and gutsy hold early in the second set.

The Serbian was crying as he left the court to thunderous applause.

Rafael Nadal cruised through his third-round match against Mikhail Kukushkin in just over an hour, winning 6-1 6-1.

Djokovic, who will play Robin Haase next after the Dutchman's 6-2 6-3 win over Thomaz Bellucci, was understandably distracted in the opening set of his match.

His grandfather Vladimir provided refuge for the Djokovic family in his Belgrade apartment during the Nato bombing raids on Serbia in 1999 and Djokovic has spoken of the influence he has had on his career.

The 24-year-old did not attend the usual media conference after his win with world tour organisers, the ATP, explaining that he "just felt totally exhausted physically, mentally and emotionally".

The first set slipped away from Djokovic as his groundstrokes sprayed long and wide, but he showed resolve at the start of the second set, breaking before clawing his way back from 0-40 adrift to cement his advantage at 3-0.

After being swept away as Djokovic drew level in the match, Dolgopolov stayed in pursuit of an upset deep into the decider.

The 23-year-old held to love in the seventh game as the players traded serve, but was eventually unpicked by Djokovic in the match's penultimate game.

An obviously emotional Djokovic looked to the skies after nervelessly serving out for victory.

The Spaniard is playing his first tournament since a recurrence of his knee problems forced him to withdraw from his semi-final against Andy Murray in Miami on 1 April.

Nadal will next face Stanislas Wawrinka of Switzerland for a place in the semi-finals.

"The match started in the perfect way," said Nadal, who improved his career record in Monte Carlo to 41-1, his only defeat coming against Guillermo Coria in the third round in 2003.

"I played much better than yesterday, in my opinion. More aggressive, more solid. My serve was much better. The return, too."

Fourth seed Tsonga edged a first-set tie-break against Verdasco, after saving two set points, before racing away in the second to set up a meeting with fellow Frenchman Gilles Simon.

Simon saved nine of the 10 break points he offered Janko Tipsarevic while converting all five of his own opportunities to beat the Serbian 6-0 4-6 6-1.