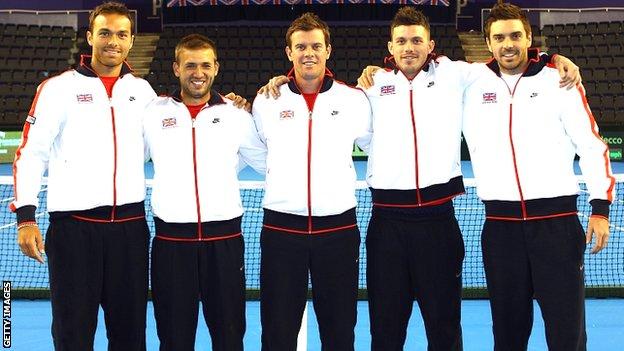 Josh Goodall will play Steve Darcis on Friday in the first rubber of Britain's Davis Cup tie against Belgium.

He is followed on court at the Braehead Arena by 344th-ranked Dan Evans, who plays world number 59 Olivier Rochus.

Colin Fleming and Ross Hutchins face Ruben Bemelmans and David Goffin in the doubles rubber at 1300 BST on Saturday.

The tie concludes on Sunday with Goodall taking on Rochus at 1300 BST before Evans goes up against Darcis.

A back problem forced Ward to to withdraw from the Euro/Africa Zone Group I match on Thursday.

The Londoner wrote on Twitter: "Gutted I can't play this weekend, woke up yesterday with a back spasm!! Good luck 2 all the boys this weekend, I'm sure they will get it done!!"

Victory in Glasgow would send GB into a World Group play-off.

It is the same venue where Goodall made his only previous Davis Cup appearance against Ukraine in 2009.

The 26-year-old from Basingstoke is on a run of five straight victories having won a Futures tournament in Germany last week.

He will go straight into the team at number one, with Evans the second singles player after guiding GB past Slovakia in February.

"It's bad luck for James, but a great opportunity for me," said Goodall.

"I'm in good form, and I know from previous experience what a great atmosphere you get at the Braehead Arena for a Davis Cup tie, so I can't wait."

Captain Leon Smith added: "It's a shame for James, because he was hitting really well in training, but Josh is more than capable of stepping up for this tie.

Smith is aiming for a sixth successive win since taking over the role from John Lloyd in 2010.

Murray has opted to work on the practice courts with coach Ivan Lendl in preparation for the clay court season.