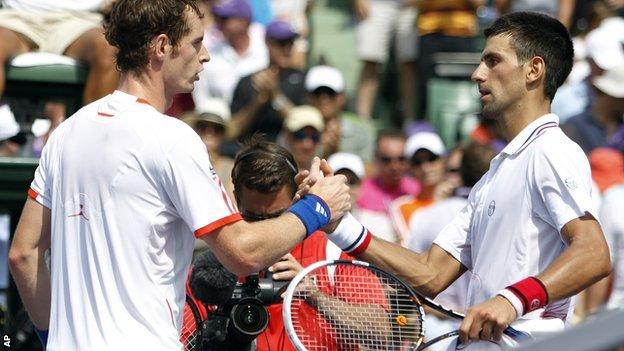 World number one Novak Djokovic lived up to his ranking with a comprehensive victory over Britain's Andy Murray to capture a third Miami Masters title.

"The conditions were tough," Murray said of the high temperatures in Key Biscayne. "There were lots of really long points and it was a long match.

"Novak deserved to win today and has played the best tennis all week."

Murray was playing only his fourth match of the tournament after Milos Raonic pulled out of their third-round match with an ankle injury and Rafael Nadal withdrew from their semi-final with a knee problem.

But the extra time off appeared to have left Murray undercooked and he was comprehensively outplayed in the first set.

The Scot gave a better account of himself in the second but he did not have a break point all match and Djokovic deserved his win.

"In the first set I didn't serve or return well," said world number four Murray, who was born a week before Djokovic in 1987.

"In the second set I got into more of his service games but he played really, really well."

Murray will have a couple of days off in Miami before preparing for the clay court season in a couple of weeks. In that time he'll probably wonder why his return and backhand, normally the strongest parts of his game, were not functioning that well in the final here. Perhaps it was a result of the two walkovers he received, meaning he only played four matches in a month before the final. In any event it's yet another reminder of just how tough it is to prevail in this generation. If it's not Federer there to stop him it's Nadal, and if it's not Nadal it's Djokovic.

Djokovic was stunned by John Isner in the last four at Indian Wells in March but returned to form in Florida and now leads Murray 8-5 in career meetings.

He joins Andre Agassi and Pete Sampras as the only men to win three or more Miami titles and is the first back-to-back champion since Roger Federer in 2005-06.

"I played really well from the start to the end," said the five-time Grand Slam champion. "Andy was really close to winning the second set and the match could then have gone either way.

"It was a fantastic tournament for me after Indian Wells. I needed to regroup, practice hard and get ready for this event.

"I managed to come up with my best tennis when I needed to so I'm delighted. I'm now really looking forward to the clay season.

"Hopefully the highlight will be the French Open, which is top of my priority list with the Olympics."

In the women's doubles final, Russians Maria Kirilenko and Nadia Petrova became the first all-country pair to lift the title since 1991 after they battled past sixth seeds Sara Errani and Roberta Vinci 7-6 (7-0) 4-6 10-4.

Kirilenko and Petrova dropped the second set to the Italian duo but took command of the Match Tie-break to emerge victorious in one hour and 52 minutes.

"I don't think I played my best," Petrova said.

"I think at the end, in the super tie-breaker, I did very well.

"It's good that in the important moments, I was able to stay calm and collected and [was] able to play good tennis. Maria played very well throughout the whole match today."