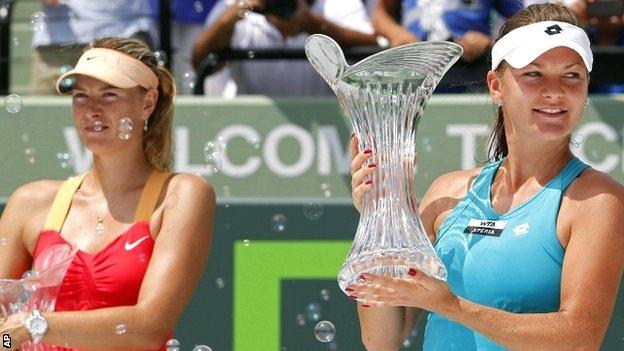 World number four Radwanska, 23, defeated the Russian at the Florida hardcourt championship to claim her ninth WTA title and her second of 2012.

Sharapova, 24, had held a 7-1 record against the Pole, and the defeat marks her fourth loss in the final at Miami.

Radwanska beat Venus Williams in the quarter-finals and Marion Bartoli in the semi-finals.

"You have to play six very good matches to win this tournament so I'm just extremely happy," said the Pole who won in Dubai in February.

This was the third time in 2012 she has finished runner-up after losing the finals at the Austalian Open and Indiana Wells, both to Victoria Azarenka.

"It's always tough, because you do a really good job to get there," said Sharapova.

"It's obviously always the toughest round."

Radwanska's only defeats of the year have come against world number one Azarenka, and her counter-punching style induced a string of errors from her opponent.

Radwanska faced down all three of the break points she faced and pounced late in each set to crack Sharapova's serve.