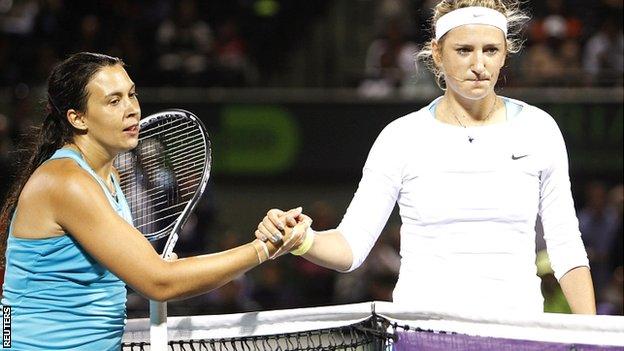 Victoria Azarenka's 26-match unbeaten start to 2012 came to an end with a quarter-final defeat by Marion Bartoli at the Sony Ericsson Open in Miami.

The 22-year-old's winning streak, which included the was the best on the women's tour since Martina Hingis began 1997 with a 37-0 run.

To play these tournaments back-to-back is really difficult physically. I'm not really worried about anything else. It was just I wasn't able to do anything physical today

Bartoli of France goes on to face Agnieszka Radwanska in the semi-finals after she beat Venus Williams 6-4 6-1.

But Azarenka's loss to seventh seed Bartoli was the shock result.

Azarenka, world number one and defending champion, fell behind early and was unable to turn the match around as she had on Monday.

Down a set and behind 5-2 against 16th-seeded Dominika Cibulkova, Azarenka rallied to win 1-6 7-6 (9-7) 7-5, but could not engineer a similar comeback against Bartoli.

"Everybody wanted to be the first one to beat me," said the Belarusian. "I think it's pretty normal.

"When I was going to play against the number one player in the world, I also tried to do the same.

"Two days ago I could turn it around and today I couldn't. But it's not going stop me from working hard and keep going the same way."

Azarenka has now lost two of her last three meetings with Bartoli.

"I'm just tired," she said. "This is expected. But what can you do? That was supposed to happen one day.

"I couldn't keep going all the way. To play these tournaments back-to-back is really difficult physically.

"I'm not really worried about anything else. It was just I wasn't able to do anything physical today."