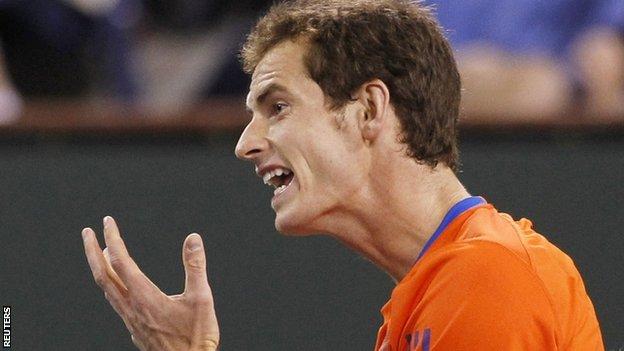 Murray had not lost a set in his two previous meetings with the Spaniard, but his backhand failed him as he went out in an hour and 40 minutes.

Garcia-Lopez, 23rd in the world in 2011, broke twice in the second set to progress to the third round.

"I have to go away and think about what happened," said Murray, who received a bye in the first round.

"I played great in practice, was hitting the ball really well. I felt pretty fresh.

"I didn't move my best tonight, but it didn't feel like I was moving really badly. He hardly missed the ball the whole match. He was playing with a lot of spin.

"It almost felt like playing the match on a clay court. I wasn't able to hit through the court and I squandered so many chances."

The Scot's defeat by Young in California 12 months ago was part of a dramatic slump of form in the wake of losing to Novak Djokovic in the Australian Open final.

He but appeared to have recovered from the defeat far better, beating the Serbian world number one in straight sets on his way to the final of his next event in Dubai.

Murray, who squandered all seven of the break points he forced against Garcia-Lopez, insists he feels better than he did at this stage last year.

"In comparison to how I felt coming in here last year, it was night and day," he added.

"I was feeling way more focused and confident, so I'm not sure exactly why that happened tonight.

"I wasn't able to hit through the court and I squandered so many chances."

Garcia-Lopez held Murray at bay through the first eight games of the match, then turned the tables, snatching a break as his opponent netted a forehand in the ninth.

"Garcia-Lopez played brilliantly from the start, his single-handed backhand a constant threat, but Murray missed stacks of chances. Twice he lost opportunities to break from 0-40 and generally he gave too many points to his opponent with miscued groundstrokes. It was not the despondent directionless defeat of a year ago, when he lost to Donald Young, but it was still a major surprise and a missed opportunity to close the ranking point gap on the top three"

After serving out in confident style, Garcia-Lopez made immediate in-roads into Murray's serve in the second set and the world number four could not summon up a response as he wrestled for control of his errant backhand.

Murray dropped a double break and 5-2 behind with a weak forehand into the net and Garcia-Lopez ensured there was no way back as he advanced to a third-round meeting with 19-year-old American Ryan Harrison.

However, Murray has less than 24 hours of respite at Indian Wells before he is back on court, partnering brother Jamie in an all-British men's doubles match against Colin Fleming and Ross Hutchins.

Djokovic, who will attempt to become only the third man in history to hold all four Grand Slam titles simultaneously at Roland Garros in June, had no such problems.

The 24-year-old thrashed Kazakhstan qualifier Andrey Golubev 6-3 6-2 in one hour 20 minutes and will face South Africa's Kevin Anderson next.

Tomas Berdych will take on former world number one Andy Roddick in an intriguing third-round match after the Czech recovered from the loss of the opening set to overcome Ukrainian Sergiy Stakhovsky 6-7 6-3 6-4.

In the women's draw, former world number ones Caroline Wozniacki and Maria Sharapova both advanced to the third round with 6-2 6-0 victories.