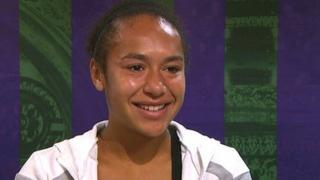 Britain's Heather Watson is visibly upset after she suffers an agonising first-round exit at Wimbledon.

When told that Manchester United footballer Rio Ferdinand had sent her positive messages via the social networking site Twitter, Watson responded with a smile and revealed she is a Red Devils fan.