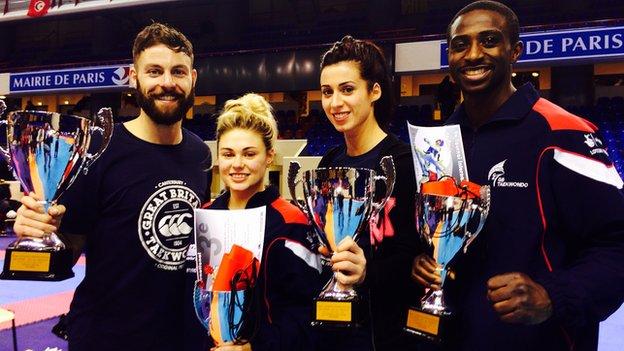 Sansum, 26, had been out of action since competing at the Mexico World Championships in July following shoulder surgery.

I'm really happy with the gold medal. It's a great way to finish off the year

Sansum switched from kick-boxing in 2010 as part of the UK Sport and English Institute of Sport backed 'Fighting Chance' initiative.

He had previously won titles in Germany and Sweden and declared earlier this year that he was now ready to regularly challenge the world's elite after fully adapting to his new sport.

Although Rio 2016 Olympic qualification regulations have yet to be finalised by the World Taekwondo Federation (WTF), it is expected only one fighter from each nation will be permitted in a weight division.

The decision to award Andrew Deer - rather than Sansum - a wildcard place at the inaugural World Taekwondo Grand Prix in Manchester saw him lose ground on Olympic bronze medallist Lutalo Muhammad - who won the division - and Cook.

"I'm really happy with the gold medal. It's a great way to finish off the year," Sansum told BBC Sport.

"I feel that I have more to come in terms of performance, but watch this space for 2014."

Reflecting on his defeat, Isle of Man fighter Cook, 22, admitted fatigue had an impact.

"Had nothing left to give after an exhausting 2013. Will now recharge to start next year [on] the road to Rio," he said on his Facebook page.

Cho, 24, who was born in the Ivory Coast and only recently returned to the British set-up after 12 months competing for France, lost to former team-mate M'Bar N'Diaye 10-9.

She lost her semi-final to Jennifer Agren of Sweden 9-5.

Walkden, 22, who suffered a second round elimination at the Manchester Grand Prix, shrugged off that disappointment by beating home-favourite and Olympic silver medallist Anne Caroline Graffe 9-1 in the final.

"I fought really well, I just wish it was at the Grand Prix last week," Walkden told BBC Sport.