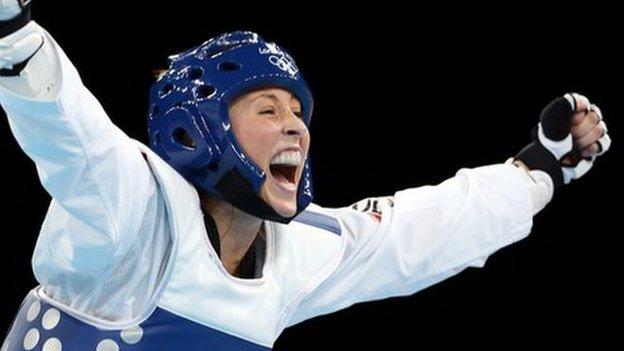 Olympic champion Jade Jones says she "fell out of love" with taekwondo less than a year after winning gold for Great Britain at London 2012.

The Flintshire-based 20-year-old said she struggled for motivation after losing in the World Championships in July and suffering a back injury.

She told BBC Sport: "I just wasn't enjoying it any more.

"I used to jump out of bed and go running to training and I got to a place where I didn't want to train."

She added: "I stopped loving the sport. I do well when I'm enjoying it and thriving off it."

Jones realised after losing to Mayu Hamada in the -57kg category at the World Championship quarter-finals that she needed to adopt a different mental approach.

She added: "After the Olympics and being on such a high and then losing in the World Championships, I was distraught.

"But now looking back on it I think it was the biggest blessing.

"I was going into every fight thinking I have to win because I am Olympic champion and putting too much pressure on myself. I lost my hunger and stopped enjoying my taekwondo."

It seems the Welsh star's decision to change her outlook has given her a fresh lease of life.

"Now I feel that I love taekwondo again," she said, "and know this is what I want to be doing. I am Olympic champion for life and I have learned to enjoy what that means. I am now in a lot better place mentally."

Jones will fight in England for the first time since the Olympics when she takes part in the Manchester Grand Prix on 13 December.

The competition is the first in a global series of four events that lead up to a Grand Final in 2014.

Crucially for Jones, the ranking points on offer will count towards qualification for the 2016 Rio Olympics.

"These are vital events to win to keep you at the top of the pack," she said.

"My aim is to get to number one and I want to beat as many people as I can to get to the top.

"But the main aim is to stay in the top six because when we get to Rio the top six automatically qualify for the Games."