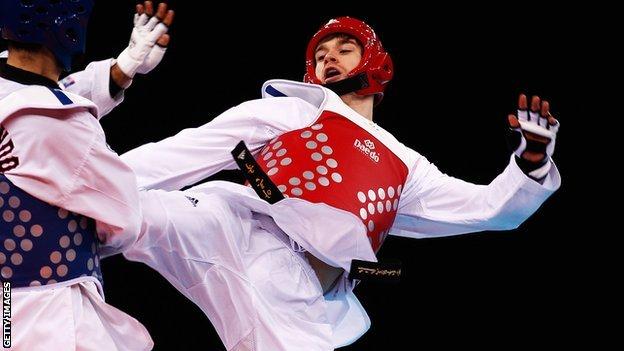 Former taekwondo world number one Aaron Cook is continuing his fighting career for the Isle of Man.

Cook switched allegiance to the island in 2012 having been controversially omitted from the GB Olympic squad.

The Dorset-born 22-year-old will fly the Manx flag at next month's World Championships in Mexico.

He said: "I've been welcomed with open arms and I am proud to represent them. I've made the right decision and there is no going back."

Last year British Taekwondo selected Lutalo Muhammad, who went on to win -80kg bronze, ahead of Cook for the GB Olympics team for London 2012.

Cook said: "I was world number one last year and looking forward to representing my country at the Olympic Games - unfortunately I didn't get picked.

"It was the worst couple of months of my life, a complete nightmare."

When his Olympic dream was shattered he switched allegiance from Great Britain to the Isle of Man, where he is now helping to train children.

He continued: "I will always represent the Isle of Man now and I am looking forward to a bright future here."

Manx athletes compete under the British flag at the Olympic Games. However Cook has said he hopes representing the Isle of Man could lead to Olympic qualification without having to go through the GB system.

He has already made a winning start for the island by in Sweden in February.

The 22-year-old has medalled in five out of the six A class events he has entered this year including gold medals in Sweden, Belgium and recently in Spain, where he defeated Nicolas Garcia Hemme, the silver medallist from the London Olympics.

"If I can help to train a few to fulfil their potential that would be great - I may even find a future star," added Cook.

Now training above a pub in Pulrose and fighting for the Crown Dependency he still retains a hope of representing Team GB at the Rio Olympics, while taking the sport on the island to a whole new level.

Isle of Man Taekwondo's director Richard Halsall said: "It is incredible - it's like a fairytale to have him here.

"We could never have anticipated having someone of Aaron's ability working with our students and representing the Isle of Man. It is a dream."

Cook, ranked number two in the world, has now travelled to Mexico ahead of the world championships in Puebla,