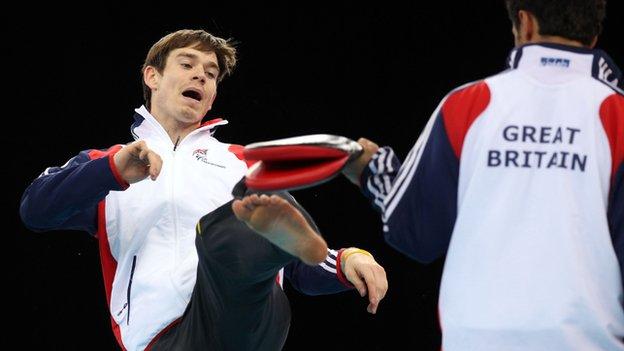 Aaron Cook will rejoin the British Taekwondo set-up for the first time in almost a year to fight at the European Championships in Manchester this May.

European champion Cook, 21, has trained with his own staff since leaving the national programme in June 2011.

But major events like the Euros require that Cook work with former coaches and support staff from British Taekwondo.

"Aaron Cook is selected at his preferred -80kg, giving the strongest indication yet that he will get the nod for the Olympic place when the squad is announced at the end of May.

"Cook won the US Open title last month, the Dutch Open this month and the British title last year - all while working with his new team after the disappointment of first-round elimination at last year's World Championships.

"And should Sarah Stevenson recover well in the next month, she could come back into Olympic consideration."

Jones, who fights in the -57kg category, was just 17 years old when she won bronze at the last European Championships, in Russia. She has since become the Youth Olympic champion.

"Last time I was sent out to get some preparation for the Youth Olympics so it was a shock to come back with bronze," she said.

"But with my extra experience I'm looking to get gold in Manchester."

Britain will send four taekwondo athletes to the London Olympics, one in each of four weight divisions. At the Euros, those spaces are filled by Jones, Cook (men's -80kg), Bianca Walkden (women's -67kg) and Martin Stamper (men's -68kg).

Walkden can strengthen her case for Olympic selection as she continues to deputise for Stevenson at -67kg in the absence of the world champion, who is fighting for fitness ahead of the Games.

A further 11 Britons will fight at the European Championships in other categories, including Damon Sansum, who fights at +87kg having made way for Cook in the -80kg category.

"We did deliberate long and hard about some of the categories and we have managed to put together a really strong team," said GB performance director Gary Hall.

"And being able to compete in front of a home crowd is great before we go into the Olympic Games. With partisan support behind the team, who knows what is possible?"