British swimmer Adam Peaty says he "enjoys the pain" of training after a record-breaking World Aquatics Championships in Gwangju.

Peaty, 24, defended his 50m and 100m breaststroke titles, including lowering his own world record in the latter, won the men's 4x100m medley relay and claimed bronze in the mixed event.

"Hard work is hard grained in me. The more pain, the better I feel."

He added: "It sounds very strange but I love training and I wouldn't change it for the world.

"It's about finding that edge on the next person and for me that's my peace in myself."

Peaty became the first man to swim 100m breaststroke in under 57 seconds in the semi-finals in South Korea, registering a time of 56.88.

"As soon as I finished at the Rio Olympics, where I was 57 seconds and no-one else even got close to 58, it was about how do you shift the margins further and I've worked really, really hard for the last three years for 0.2 seconds - which is insane. No normal person does that," he said.

Peaty said success comes with its downfalls, adding that "when you're in that competition, yes you get those massive highs but you also get the massive lows".

A tweet following his relay success last week revealed he has "struggled and triumphed, gone through depression and come out the other side". 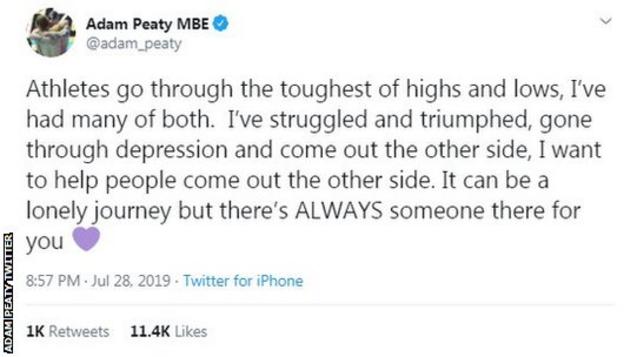 "When you come back from an Olympic Games they call it the Olympic blues. You've been with that team and that performance and everything around sport and then you come home and it's all gone.

"You have this massive void in your life where you consider what you're actually living for, in a sense.

"It sounds dangerous to be thinking like that, but you need to get help. It's grey and dark and difficult to adjust, and it's important to have friends and family to speak to.

"I had a mate who was there for me. I didn't want to go to a clinic, I just wanted to have a normal chat with someone who would tell me as it is. It got my head screwed back on and made me realise what was important in life.

"Sport inspires people, but it's not everything.

"Most athletes feel that if you lose, you lose everything - but that's not the case as you still have a family that loves you, or a dog that still licks your face.

"It's those little things that are important."

If you've been affected by mental health, help and support is available via the BBC Action Line.