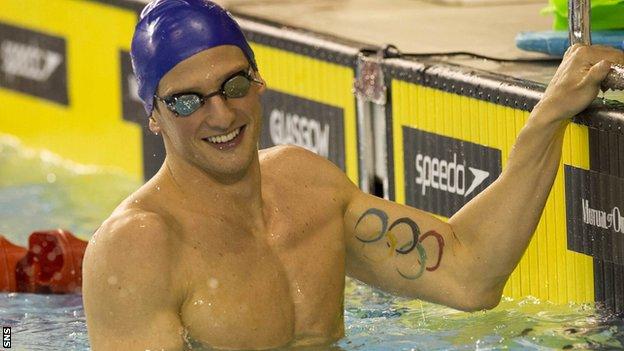 Michael Jamieson says he is "back to business" after a recent health scare and aims to break his new British record in front of a home crowd.

But he recovered to win silver in the 200m breaststroke at the European Short Course Championships in Denmark.

And now Jamieson wants to beat two minutes 1.43 seconds in the weekend Duel in the Pool as Europe go up against America in Glasgow.

Tollcross Centre, the venue for the 2014 Commonwealth Games swimming events, is where Jamieson began his career.

"It's going to be a great event," said the Olympic silver medallist. "The pool looks fantastic.

"It's the first time I've been back to compete at Tollcross and it will be great fun.

"I've got loads of friends and family coming over and the idea for me performance-wise is to take a bit of time off last week and swim a bit faster.

"We've got a really strong European team and hopefully we can give the Americans a run for their money."

Jamieson, one of four Scots in the European Allstars team, was sanguine when reflecting on his health scare, saying: "It was just a blip from pushing as hard as I can.

"I've been given the all clear and I'm competing as normal in preparation for the Commonwealth Games."