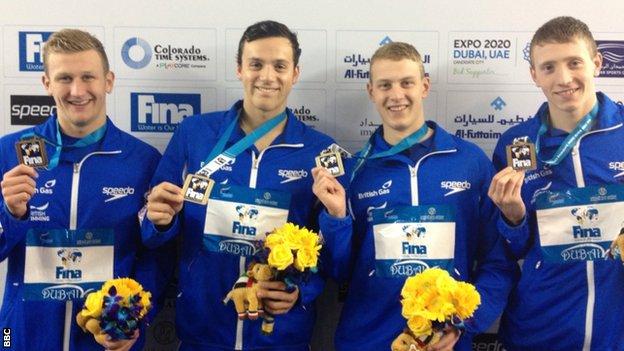 Six of the squad who helped British Swimming win an impressive seven medals at the World Juniors could challenge for Olympic honours in Rio.

The sport endured a "disappointing" senior Worlds in July and fell short of their Olympic medal target in 2012.

"We have half a dozen youngsters who could be very competitive come Rio," Spice told BBC Sport.

James Guy, 17, who finished fifth in the 400m freestyle final at the senior Worlds in Barcelona this summer, secured two individual silver medals in Dubai and anchored the men's 4x200m freestyle relay team to gold in a new championship record of seven minutes 15.36 seconds.

Sophie Taylor, also 17, was another to impress, finishing second in the 100m breaststroke, third over 50m and was also a member of the silver medal winning 4x100m medley relay squad.

"We probably slightly exceeded where we thought we were at," said Spice, who although excited about their potential is also urging caution.

"A lot of medals at the juniors doesn't guarantee medals at seniors, but what it does do is help identify those that are worthy of further investment."

British Swimming are currently interviewing elite and junior development swimmers to establish what funding they will receive through to the Rio Olympics - having supported 42 podium and 55 development athletes in the build-up to London 2012.

A £4 million funding was cut followed their failure to achieve a target of five Olympic medals last year and as such British Swimming are reducing the number of elite athletes to 22 - but have increased the amount of 'podium potential' places to 65.

"What we're trying to move away from is selection that is based on times and looking towards potential to medal," continued Spice.

In addition to a new funding structure Spice is also hoping to utilise the experience of four-time Olympic medallist Rebecca Adlington, who retired earlier this year and other former swimmers such as 2006 Commonwealth champion Ross Davenport.

"There's a real benefit in transferring that 'been there and done it attitude' which I think we don't use well enough," said Spice who has utilised this approach in his previous roles with the England Rugby, England Hockey and GB Basketball teams.