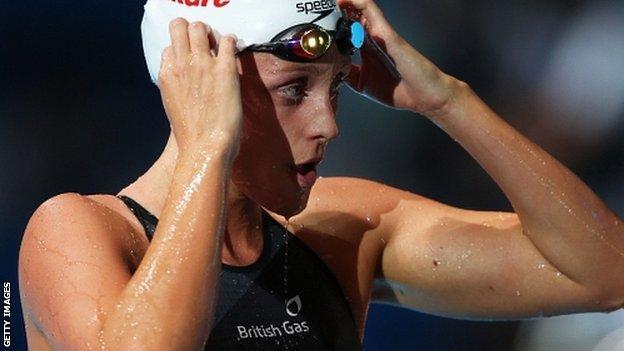 Francesca Halsall finished fourth in the 50m butterfly final to leave Britain still waiting for a medal in the pool at the World Championships.

Halsall clocked 25.70 seconds - one hundredth slower than her personal best and 0.17 off third place in Barcelona.

"That to me was as good as Francesca Halsall has got at the moment, it was only one hundredth off her best, so she performed at the right time.

"To me, what she needs to work on is getting stronger, which will help her on the starting block and in the pool. She needs to do the work in the gym and then transfer that onto the water, but it's there and next year she'll be back better, stronger and faster."

Halsall told BBC Sport: "Fourth place is a horrible place to finish but the other girls were just faster.

"I just wanted to swim my own race and did a PB yesterday. I knew I was swimming fast and was there or thereabouts. These things happen."

Halsall returned for the 50m freestyle semis later on Saturday, and secured her place in Sunday's final as the fourth fastest qualifier.

Katie Ledecky completed a historic treble with victory in the 800m freestyle in a new world record time of eight minutes 13.86 seconds.

That beat the previous mark of 8:14.10 set by Adlington at the Beijing Olympics in 2008, and gave Ledecky her third gold medal of the week after she smashed the 1500m world best and also took gold in the 400m.

Denmark's Lotte Friis was second in 8:16.32 and New Zealand's Lauren Boyle won her third bronze medal of the championships with 8:18.58.

"I'm thrilled," said Ledecky. "I've exceeded all of my expectations with what I've achieved this week here.

"She [Adlington] has been great for the sport and done a lot to promote it and distance swimming. She's also definitely set some tough standards for us all to chase."

Adlington, who is now a BBC swimming pundit, said: "I'm obviously sad to lose my world record because I loved seeing my name still in the programme but it's brilliant for the sport."

Lithuanian Ruta Meilutyte, 16, set a world record of 29.48 in the 50m breaststroke semi-final.

Her British coach Jon Rudd, from the Plymouth Leander Swimming Club where Meilutyte trains, told BBC Sport that something had "stirred" inside the swimmer after she saw Russian rival Yuliya Efimova break the world record in the morning's heats.

"I knew it pumped her up and everything got serious," said Rudd.

" I love seeing the new generation and seeing the event move on, and I thought Katie Ledecky was going to go 8:12.

"It will be interesting to see how far she can push it now. She's obviously had a fantastic week and I'm honoured to have raced her. She didn't just want to win gold, she wanted that world record."

"We don't do any work on the 50m, it's all for the 100m, but she has amazing natural speed and has been getting quicker and quicker. The final should be a great race on Sunday night."

US swimmer Missy Franklin, 18, captured a record-equalling fifth gold medal at a single World Championships in the 200m backstroke.

"This is awesome," she said. "I'm exhausted. It's great after the Olympics that I've shown I've been able to motivate myself again and all the training has been worth it."

He won in a new personal best of 51.06, ahead of Hungary's Laszlo Cseh and Poland's Konrad Czerniak. Le Clos had already won gold in the 200m butterfly earlier in the week.

Elsewhere, there was an emotional victory for Brazilian Cesar Cielo, who won the 50m freestyle final in 21.32 seconds.

The 26-year-old failed a doping test in 2011 but escaped a ban, and his subsequent successes are met with a degree of cynicism within the sport.

A tearful Cielo stood on the podium with silver medallist Valdimir Morozov of Russia and George Richard Bovell of Trinidad and Tobago, who claimed bronze.

In addition to Halsall's 50m freestyle final, Great Britain will also have Daniel Fogg in the 1500m final on the final day of competition.

There is also hope that world short course champion, Hannah Miley, can progress through the heats to challenge for a medal in the 400m individual medley.