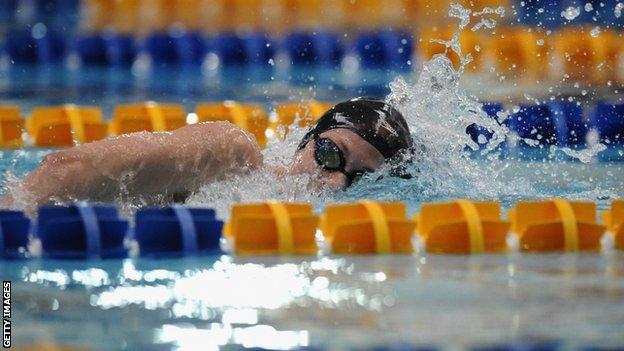 Jazz Carlin, who missed out on a place at the 2012 Olympics, underlined her return to form with a third victory at the international meeting in Leeds.

The 22-year-old reeled in Olympian Hannah Miley to win the 400m freestyle, adding to her 800m and 1500m victories.

Carlin was not selected for the Games after two years battling illness.

Simmonds beat the field in a time of two minutes, 10.25 seconds.

It was second place again for Liam Tancock, who was beaten in the 50m backstroke as Dutch swimmer Bastiaan Lijesen touched the wall in 25.32 secs.

Tancock holds the world record for the event with a time of 24.04 secs but explained he was in a period of heavy training.

"It's all part of the plan looking ahead to the summer," he said. "I am pretty pleased with that, it's going well."

The inaugural four-day event at the John Charles Centre for Sport has been the first long-course international competition for the Britons since the London Games.

The squad are tuning up for June's British trials ahead of the World Championships in Barcelona.

Carlin says she is happy to have a dilemma about which event to focus on ahead of the Worlds.

"The 400m is my favourite event but my coach thinks I may be better suited to the 800m and 1500m so we'll need to have a sit down before June and discuss which to prioritise," she said.

"The 400m was always going to be tough after the 1500m yesterday, but I just said to my coach that I wanted to give it a go and to come away with gold is fantastic."

It was also a successful meet for Roebuck who notched up victories in the 200m individual medley and the 100m and 200m butterfly.

"It was a really tough race tonight but I enjoyed being up against such a high-calibre field," said Roebuck, who won the 200m IM in a time of 2:00.04.

"I enjoy the 200m more (than the 400m medley) so I will be focusing on that for the rest of the season and will continue to work hard on my sprint speed in training."

In the multi-disability races, Jessica-Jane Applegate (S14) wrapped up her fourth title of the week in the 50m freestyle in a British record time of 28.04 secs.

British swimmers fell two short of their medal target of five at the 2012 London Olympics.

Silver medallist Michael Jamieson is the only 2012 medallist competing in Leeds and he got back to work with two strong victories. Rebecca Adlington - who won two bronze medals in London - has retired.

The 16-year-old was still disappointed, however, as she had been hoping to set a good enough time to qualify for the national able-bodied youth competition.

"I am really trying to go for the abled-bodied nationals. I'm really competitive so hopefully next time I'll get it," she said. "This week has been great though."