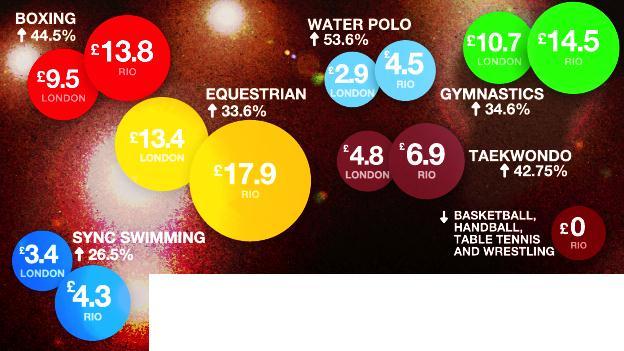 Britain's boxers are among the biggest winners in UK Sport's Olympic 2016 funding programme, but swimming has had a £4m cut to its budget.

Boxing saw an increase of 44.5% to £13.8m but handball, basketball, table tennis and wrestling lost all support.

Overall, 18 sports have seen their money go up, while five have had their budget cut by UK Sport.

The Paralympic portion of the overall funds has risen from 16% of the total budget to 20%, with swimming, athletics and cycling all being rewarded for their success with big rises, but archery and powerlifting cut.

The investment will be used to support Britain's elite Olympic and Paralympic athletes and comes after Sport England revealed an increase to grassroots sports funding on Monday.

UK Sport said the distribution of money was based on whether sports met their medal target in London.

Britain's boxers won five medals from a 10-person team to meet their target, with Nicola Adams, Luke Campbell and Anthony Joshua all winning gold, and the sport's funding rises from £9.5m to £13.8m.

In contrast, swimming missed its target of five to seven medals, winning only three, and its funding is reduced to £21.4m - a cut of 14.9%.

Archery, badminton and volleyball have also had their funding cut after missing their targets, as has judo, despite the latter beating its medal target.

Another big winner is water polo, despite Britain not winning any medals in the sport at London 2012. Funding is up from £2.93m for the men's and women's team to £4.5m solely for the women's.

Volleyball's budget has dropped from £3.5m to £400,000 with only women's beach volleyball benefiting from central support.

Athletics sees its funding rise by £1.6m after winning six medals in London, while cycling receives an increase of £4.6m after bringing back 12 medals.

Britain's sailors, who won five medals after being set a target of three to five, are boosted by an extra £1.5m, while the equestrian team, whose five medals included three golds, receive a £4.5m boost.

UK Sport's target is for Britain to win more medals in Rio than in London, where the teams won 65 medals at the Olympics and 120 in the Paralympics.

UK Sport chief executive Liz Nicholl said: "We want to be the first nation in recent history to be more successful in the Olympics and Paralympics post-hosting.

"Today will be good news for some and it will be painful for others who haven't met the criteria.

"They are very disappointed but I think some of these sports have to improve their base, their competition structure, and drive up competition before they can really compete for medals at a world level.

"We have been guided by our no-compromise approach.

"I hope the sports that have been hit today will go to sports like hockey and gymnastics and talk to them about how they have got back to where they are today.

"Hockey had their funding cut [in the past], they went bust, they were in dire straits and they have done amazingly well to recover."