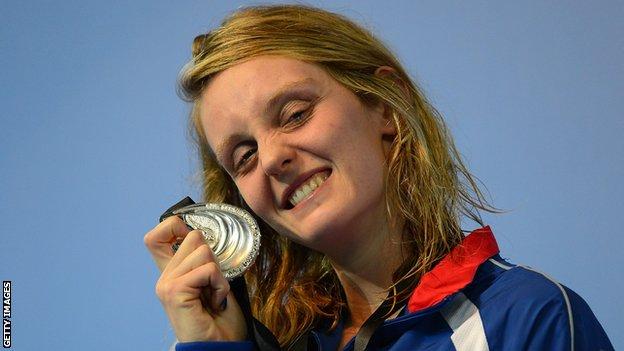 The 22-year-old finished in 23.87 seconds behind gold medallist Aliaksandra Herasimenia of Belarus.

Jemma Lowe, in the 100m butterfly, took her second bronze of the week in a Welsh record time of 56.66 seconds.

Halsall was in the mix from the start after qualifying fourth, but was unable to prevent Herasimenia from taking the top spot on the rostrum by 0.23 secs.

The Loughborough ITC swimmer said she was pleased to put behind her a disappointing London 2012 campaign, where she twice narrowly missed out on a medal.

"After the Olympics, I was like, I'm not a good swimmer, I'm not as good as I thought I was," admitted a tearful Halsall.

"But now I'm getting my confidence back, enjoying swimming more and looking forward."

Earlier in the evening, Lowe had looked on course for the same position at the halfway stage of her race, but dropped back a place in a tight finish.

"I'm so happy and with that time and with third place," the Swansea ITC swimmer said. "I really enjoyed the short course and after the Olympics to come back into the pool and be competing again is just fantastic."

Davies was not too disheartened after missing out on a top-three place as she told BBC Sport: "I know fourth is a rubbish position to finish in, but I'm really pleased with that time so early in the season."

Britain won just three swimming medals at London 2012 despite being set a target of five to seven by UK Sport.

That led to the resignation of previous head coach Dennis Pursley and subsequent criticism from double Olympic gold medallist Rebecca Adlington over the delay in naming a permanent successor.

Acting head coach David McNulty, who says he has no interest in the full-time position, was impressed with Great Britain's overall performance at Istanbul.

"I honestly thought three or four [medals] would be a good because not everyone is here," he told BBC Sport.

"It's a mixed team and I didn't know what to expect but six medals at these World Championships is phenomenal and something to build on."

British Swimming will discover on Tuesday how much funding they will receive for the four-year Olympic cycle leading into Rio 2016 and McNulty hopes the results in Istanbul send out a positive message.

He said: "I know the Olympics could have gone better for us, but I've known over the past few years that we are getting stronger - the programme is not broken and these medals show that we are a nation on the rise."

There was further entertainment in the pool as five-time Olympic champion Ryan Lochte once again gave away his medals in Turkey, gifting his 100m individual medley gold and 200m backstroke silver to supporters.