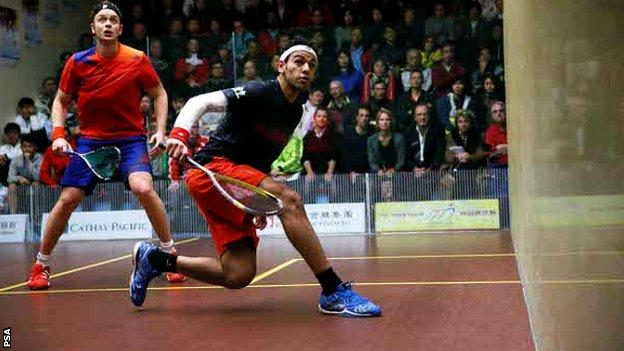 Britain's James Willstrop recorded one of the most impressive wins of his career when he beat Egypt's Mohamed Elshorbagy in a 122-minute five-game thriller in the Hong Kong Open.

Third seed Willstrop, 30, entered the quarter-final with a 9-3 head-to-head record over his 22-year-old opponent.

But it was Elshorbagy who started the brighter, edging the first two games.

Willstrop then fought back, clinching victory on his eighth match-ball after a marathon 39-minute decider.

I think we were both at the top of our games, both playing some quite brilliant - and tough - squash

The match was Willstrop's second longest in his 14-year career, five minutes short of a 127-minute semi-final epic against compatriot Nick Matthew in the 2010 Canary Wharf Classic.

"It was a really close match - we were very tightly matched," said former world number one Willstrop.

"It was so close all the way - no player had any dominance at any stage, which is very unusual as you usually get a phase where one player gets a lead but there was hardly any of that.

"I think we were both at the top of our games, both playing some quite brilliant - and tough - squash.

"I'm happy to have won the match - there are a lot of positive thoughts."

Willstrop will play surprise opponent Borja Golan after the Spaniard beat top seed and defending champion Ramy Ashour, who appeared to be struggling with a recurrence of the hamstring injury which ended his world title bid in November.

Ashour called it quits at 7-0 down in the final game, and Golan admitted: "When you respect a player like we all respect Ramy it is tough. He is such a talented player and that is the last way that I want to win a match.

"I hope he is soon on the court - but for a long time, not just a few tournaments."