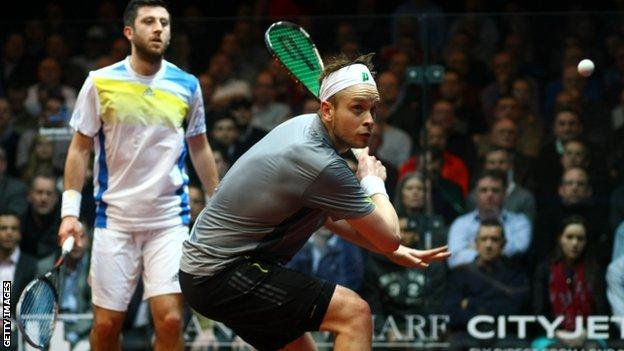 The only player standing in the way of an all-English final is Egypt's Mohamed El Shorbagy, the world number five, who earlier laboured to a narrow 3-2 win over Finnish qualifier Henrik Mustonen.

Shorbagy, who combines professional squash with university studies in Bristol, will play Willstrop in a keenly anticipated clash.

Willstrop dominated an increasingly frustrated Selby with what he described as "very clinical and accurate squash".

"Daryl is very tough, very durable and so I had to be very focused. I know I will have to step it up again in the next few days," Willstrop added.

Matthew played fast and furiously to take a 2-0 lead over Coppinger. But the improving South African rallied to take a tight third game, before Matthew quashed hopes of a comeback to set up a clash with Barker.

"Steve played very well and in the third game, it just shows that you can never ease up," Matthew said. "I was getting close to a 3-0 win but he came back strongly to win it.

"James and Mohamed looks like being a great game in the other half of the draw, but I will just concentrate on my own match."

"He came out at a fast pace and just went for it, he had nothing to lose and he was just going for it," said the Egyptian.

"I played a good match and am proud that I was able to win. Sometimes when you are not playing 100% you just have to... find a way to win."

The Finn's performance saw him emulate the scoreline of the only other clash between the pair on the PSA tour which ended in a narrow 3-2 win for Shorbagy in October 2012.