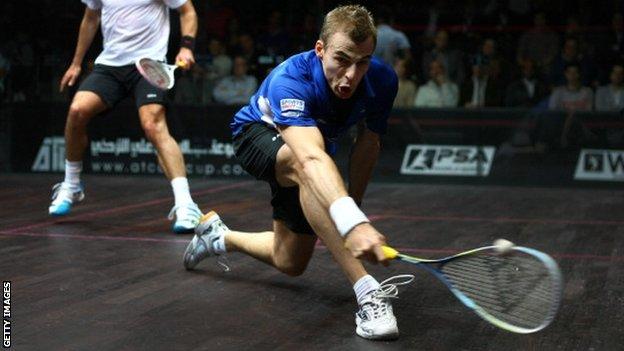 World number three James Willstrop was unable to make it an all-English encounter as he lost 11-7 8-11 11-7 to Amr Shabana in his semi-final.

Earlier, Laura Massaro overcame Jenny Duncalf in an all-English semi-final to clinch a place in the women's final.

Head-to-head for the finals

She will face Nicol David of Malaysia in the final after the world number one beat France's Camille Serme 11-5 11-8.

"It's a nice little confidence boost to have beaten Nicol in the pool match but she raises her game," said Massaro.

"She hates to lose so I'd expect things to be a lot tougher against her in the final."

David, who won the tournament in 2012 added: "In our pool match, Laura was just playing better on the day and she's a tough player but I just know that as the week develops you feel better and better.

"I'm just looking forward to playing the final against her and putting it all out there. Hopefully I can save the best for last."

It took world number two Matthew 65 minutes to get the better of Frenchman Gaultier in a high octane match.

"I'm looking forward to playing Amr," said Matthew of an opponent he has only beaten six times in 19 meetings.

"He took me to the cleaners when we played earlier in the week. Hopefully I can get some revenge."