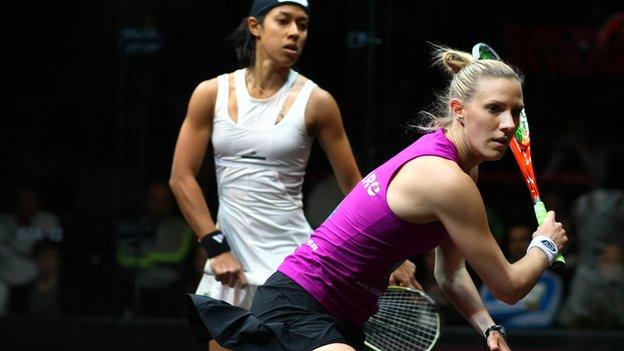 Top seed James Willstrop, who opened with a win on Wednesday, was defeated 11-6 13-11 by Greg Gaultier of France.

Willstrop and David's hopes remain alive as the competition, for the top eight men and women in the world, opens with a round-robin stage before Saturday's semis.

"You have to play well against Nicol, otherwise you're off court before you know it," said Massaro.

"She's just won her seventh world title, so she's playing well, which makes winning today even more special given our final last week. She's a great champion and she'll definitely be back.

"I was just really focused on what I needed to do to win the match. She's beaten me quite comfortably in our last few matches. Even though they've been quite hard, they've still been 3-0 or 3-1, so it's just a case of me trying to execute my game plan.

"I've beaten her before, so its not too much of a surprise when I'm in a winning situation because I know that I can, but you don't get yourself into those situations unless you're doing the right things."

Fellow English player Jenny Duncalf could not repeat her opening day win and went down 11-7 11-4 to France's Camille Serme.