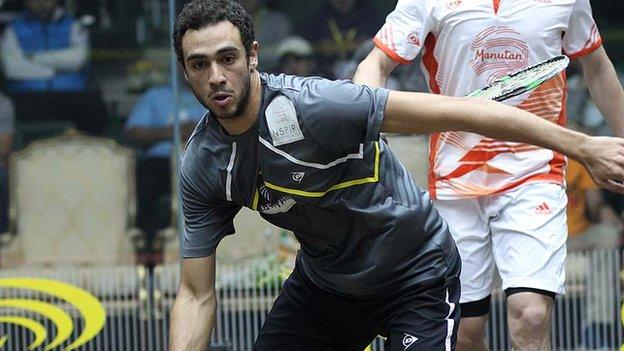 The 25-year-old, who was also champion in 2008, ensured by beating Matthew he will replace England's James Willstrop as world number one in January.

Ashour's victory and return to the top of the rankings confirms that the hugely talented but unorthodox player from Cairo is back to his best after injuries prevented him from finishing the 2010 and 2011 World Championships.

"Sure, to win it the first time was amazing, but when you win it (again) after a lot of struggle it means something different, and it feels a lot different," he said.

"I am proud of myself because I have been through many hard times. I feel like I am a stronger person now."

Ashour added: "Mohamed - he was amazing today. I'm really proud of the fact that this was an Egypt final."

El Shorbagy looked capable of causing an upset when he took the first game in just 10 minutes and then recovered from 2-1 down to force a decider, and move 8-7 ahead.

However, it was Ashour who prevailed, converting his first match ball after 90 minutes.

"Commiserations to Mohamed El Shorbagy, losing in the final but unreal performance to back up day after day mentally as much as physically at 21!!!"