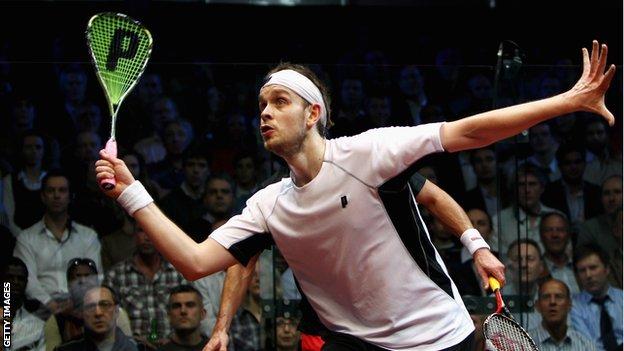 World number one James Willstrop continued his bid for a first world title with a second-round win over Canada's Shawn Delierre.

Willstrop, 29, will next face Saurav Ghosal, the first Indian ever to make the last 16 of the World Championship.

Ghosal, 26, has been based in Yorkshire for much of the last eight years and sought advice from Willstrop's father, Britain's most successful coach.

"But he has held leading players in such high esteem that this may have prevented him from beating them. But because he knows James so well, he won't be overawed by him."

Willstrop trailed by a game and 2-0 in his opening match against qualifier Delierre but was far quicker out of the blocks on Sunday, winning the first eight points and 22 of the first 24 on his way to victory in 25 minutes.

Malcolm Willstrop believes his son's relationship with Vanessa Atkinson, the 36-year-old, English-born former world champion from The Netherlands who won the World Open in 2004, is helping his game.

"He could have no better ally than his girlfriend," Willstrop senior added. "She understands, she's very intelligent, and she's been through it - he'll never meet anyone better for him. They are ever so well suited."