Formula 1 driver Lewis Hamilton was named BBC Sports Personality of the Year 2020 in front of a social distancing-induced virtual audience in Salford.

In a year in which the coronavirus pandemic disrupted sporting calendars across the world, the Mercedes driver continued his relentless pursuit of greatness.

Not only did he equal Michael Schumacher's record of seven world titles, he surpassed the German legend's record of 91 grand prix wins.

After finishing ahead of second-placed Jordan Henderson and Hollie Doyle in third, it didn't take long for the 35-year-old to start trending on Twitter as viewers congratulated him. 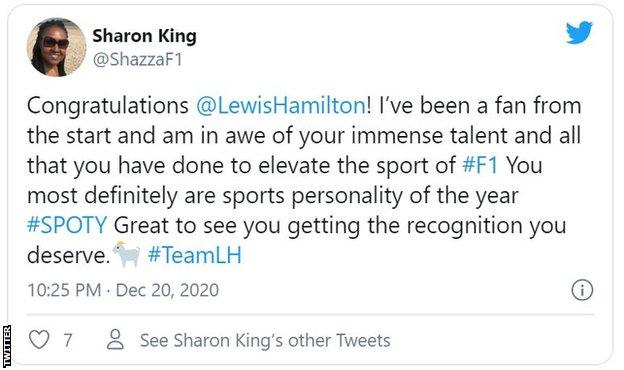 Among the viewers in the virtual audience of about 700 were NHS workers and fundraisers, plus former winners of the award.

In true 2020 style, Dame Kelly Holmes tweeted a snapshot of her tuning in from her living room...

On a night flooded with emotions, the tone was set by Captain Sir Tom Moore.

The 100-year-old war veteran captured the hearts of the British public during lockdown when he raised millions of pounds for NHS charities by walking laps in his garden.

He picked up the Helen Rollason award for his outstanding achievement, and tears swiftly followed... 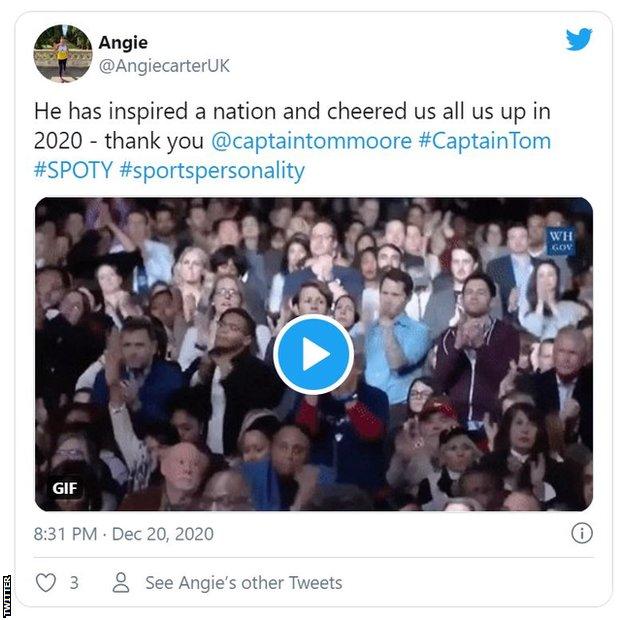 Captain Tom's actions during the pandemic were so inspirational, a special Sports Personality gong was created in his name - the Captain Tom Young Unsung Hero award.

Nine-year-old Tobias Weller, who has cerebral palsy and autism, was named the inaugural winner for raising more than £150,000 by walking two marathons, .

For the second time in a matter of minutes, viewers were brought to tears...

A continuous theme throughout 2020 has been Manchester United forward Marcus Rashford's campaign to raise awareness of child food poverty in the UK.

Fresh from playing in his side's 6-2 victory over Leeds United only hours before, the 23-year-old showed up on stage to collect the Expert Panel Special Award for his work off the pitch.

And the footballing world were watching...

On the subject of football, it was another successful night for Premier League champions Liverpool.

Alongside captain Jordan Henderson's second-placed finish in the main award, the club won Team of the Year with manager Jurgen Klopp picking up Coach of the Year.

The German even had time to poke fun at bitter rivals Manchester United... 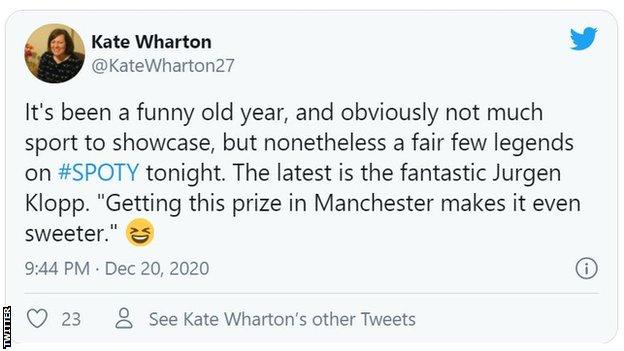 Sports Personality of the Year 2020 delivered a night at the end of a year that will live long in the memory.

Same again next year (but minus the pandemic)?