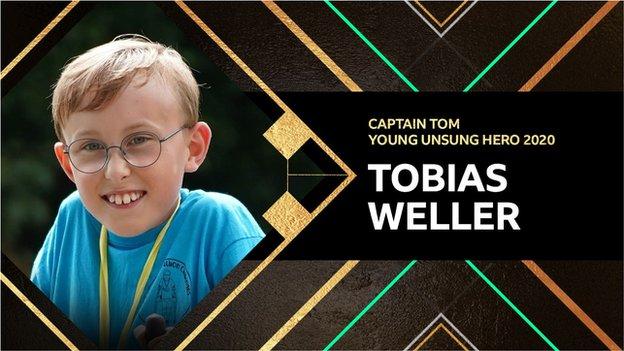 Tobias Weller has been awarded the inaugural Captain Tom Young Unsung Hero prize at the BBC Sports Personality of the Year show.

Nine-year-old Tobias has cerebral palsy and autism, and uses a walking frame.

During the first UK lockdown earlier this year, he decided to walk 50 metres every day on his street in Sheffield.

Tobias managed to walk for 70 consecutive days and, by increasing his distance each day, completed a full 26.2 mile marathon.

But he was not finished there. In the summer, he set out on a second marathon, this time using a race runner that allowed him to run for the first time in his life.

He completed his second challenge on 1 August, having started on 14 June, and was joined by Dame Jessica Ennis-Hill for the final kilometre.

Across his two marathons, Tobias raised more than £150,000 for his two favourite charities, Sheffield Children's Hospital and Paces School.

He gained the nickname Captain Tobias in reference to his inspiration, Captain Sir Tom Moore, who sent a message of congratulations when his fundraising passed the £100,000 mark. He was also congratulated by Prime Minister Boris Johnson.