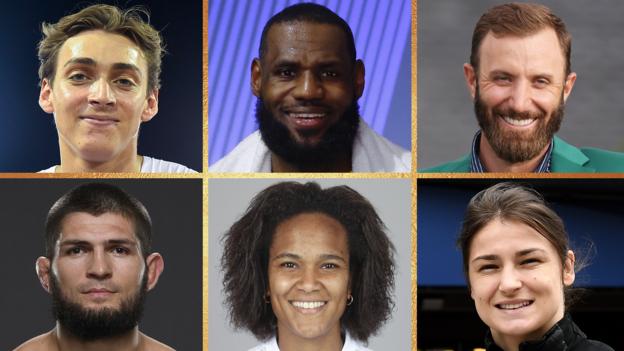 Voting is now closed for the BBC's World Sport Star of the Year 2020 award.

There were six nominees for the award, which was won last year by marathon runner Eliud Kipchoge,, and the winner will be announced in the build-up to the show.

You can watch Sports Personality of the Year from 20:00 GMT on Sunday, 20 December on BBC One, BBC iPlayer and the BBC Sport website and app.

Who were the World Sport Star contenders?

The Swedish pole vaulter scaled new heights in 2020 - breaking the world record twice in a week in February. The second of those saw the athlete, nicknamed Mondo, vault 6.18m at the Indoor Grand Prix in Glasgow. In September, he set the highest outdoor mark of 6.15m at the Diamond League meeting in Rome.

Named the most valuable player in the NBA Finals as the American star inspired his Los Angeles Lakers side to victory over the Miami Heat. 'King James' became the first player in NBA history to be named Finals MVP with three different teams, and victory was especially poignant given the death of Lakers' legend Kobe Bryant in January.

A stellar year culminated with a first Masters triumph at Augusta, in a record-breaking score of 20 under par. That capped off a year in which the American golfer regained his place as world number one, became the FedEx Cup champion and was named as the PGA Tour Player of the Year.

The UFC lightweight champion extended his perfect professional record to 29 wins with an emotional victory over interim champion Justin Gaethje. The Russian, considered by some to be the greatest MMA fighter of all time, fought just months after the death of his father, coach and mentor Abdulmanap, and announced his retirement straight after victory.

Captained her Lyon side to Champions League glory for a fifth straight year and was once again named in the Uefa squad of the season. Played a key role as they won a 14th consecutive league title and she picked up her ninth Women's French Cup winner's medal. Shortlisted for the Best Fifa Women's Player award.

The Irish fighter continued her dominance of the sport as she defended her four world lightweight titles on two occasions. The London 2012 Olympic champion's first defence came in August when she produced a gutsy display to beat Belgian rival Delfine Persoon. She then outclassed the previously unbeaten Miriam Gutierrez at Wembley Arena.

Get involved with Your Greatest Sporting Moment by sending us your videos and stories of your personal sporting achievements this year.