England cricketer Ben Stokes has been voted BBC Sports Personality of the Year 2019.

The all-rounder was man of the match as England won the World Cup for the first time with a dramatic super over victory against New Zealand at Lord's.

Stokes, 28, also hit an unbeaten 135 in the one-wicket third Ashes Test triumph against Australia at Headingley.

Durham's Stokes was presented with his award by the Princess Royal and former Manchester United and Scotland footballer Denis Law.

He becomes the first cricketer since Andrew Flintoff in 2005 to win the prize.

New Zealand-born Stokes is missing the first warm-up match of England's Test tour of South Africa, which starts on Tuesday, in order to attend the show in Aberdeen. 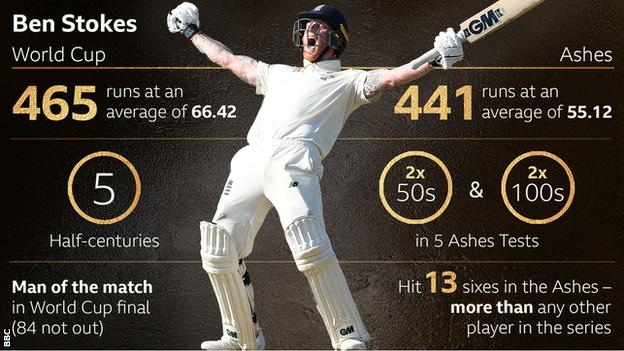 "First of all, I think congratulations to all the nominees. What you've managed to achieve as individuals and do for your sport is simply sensational, so well done to you too.

"There's so many people you feel you have to thank when you're up here. It's an individual award, but I play a team sport and one of the great things about that is you get to share special moments with those team-mates, coaches and without that effort you put in, I wouldn't be up here receiving this award so thank you so much.

"Two years ago was a tough time for me in my life and I've had so many people help me through that. My fantastic manager and friend Neil Fairbrother, you're more than an agent, you're an incredible man. I don't know how you've put up with Andrew Flintoff and me, you and [Fairbrother's wife] Audrey, you're incredible people.

"My parents, they live on the other side of the world, they don't get to share moments like this, the World Cup and be there with me, but the time you dedicated to me growing up, the selflessness to get me to training camps and around the country, this is for you. I love you so much, thank you.

"To my amazing wife, Clare. Family to me is more important than what I do for a living. It puts perspective on everything, after the good and bad days they are there for me no matter what. My two kids too, they are awesome I love you so much.

"Back to Clare, you're a rock. You always have been. You always will be. I wish you could come here and share it with me, you deserve it just as much. I love you so much and I'm so proud to call you my wife.

"I'm guessing I should leave it there."

Other award winners at Sports Personality 2019

The very best in British and world sport celebrated a magnificent year at a sold-out P&J Live Arena in Aberdeen.

Scottish singer Lewis Capaldi and Aberdeenshire-raised Emeli Sande wowed the crowds with emotional performances while there were special moments to treasure as other awards were handed out.

Best of Sports Personality of the Year 2019