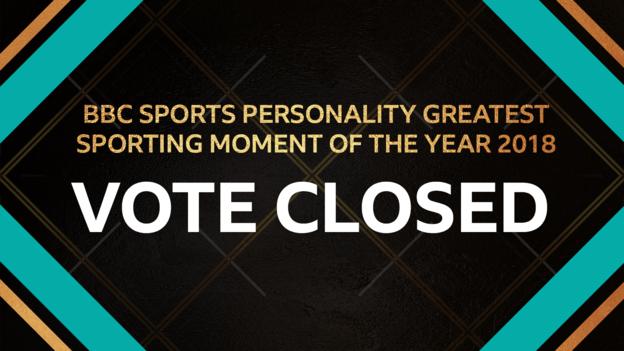 Voting has now closed for this year's Greatest Sporting Moment of the Year award.

The winning moment will be announced on this year's Sports Personality of the Year awards show on Sunday, 16 December, live on BBC One from 19:00 GMT.

However, you can still learn more about the five contenders below.

England's primary aim going into April's Commonwealth Games was to reach the final - that in itself would have been enough to make history.

It was the first time since netball was introduced at the 1998 Games that the final did not feature both Australia and New Zealand but even before the Games started there were rumblings of an upset by England's Roses.

And what an upset it was, as a last-gasp goal from Helen Housby saw England record their first win over overwhelming favourites Australia since 2013.

What? England beat Colombia on penalties to reach the quarter-finals of the World Cup

England fans had become so accustomed to losing penalty shootouts that when their World Cup last-16 tie with Colombia finished 1-1 at the end of extra time, the groans of inevitability were deafening. England were surely heading home.

But a new era of English football was born inside Spartak Stadium, as Eric Dier scored the winning kick after Jordan Pickford's brilliant save from Carlos Bacca.

It marked the Three Lions' first knockout victory at a major tournament since 2006 and earned Gareth Southgate and his waistcoat a place in the nation's heart forever.

What? England opener Alastair Cook reaches a century in his last Test innings before retiring

Where? The Oval, London

Alastair Cook may have once doubted his popularity among England fans but there was no denying the warmth and pride The Oval crowd had for 'Chef' when he bowed out of international cricket against India in September.

And he did it in style too, ending his Test batting career with a century, just as he had started it. He was given a standing ovation at the start of the day, then again when he reached three figures, before the entire ground stood to applaud as he left the field after being caught behind for 147.

The left-hander finished his international career having scored more runs and made more centuries for England than any other Test player.

Tiger Woods had gone five years without a win when he arrived in Atlanta for the season-ending Tour Championship. Less than a year before, the American was ranked 1,199 in the world after spinal fusion surgery - the latest of multiple operations.

With his place at the top of the leaderboard in little danger during the final round, thousands of fans spilled on to the 18th fairway to follow him to the green chanting "U-S-A" and "Tiger, Tiger".

Tyson Fury fights back from knockdowns

What? Tyson Fury comes back from two knockdowns to draw with WBC heavyweight champion Deontay Wilder

A former WBA, IBF and WBO heavyweight champion, Fury returned to the ring in 2018 having spent 30 months away. During that time he overcame depression, accepted a backdated two-year doping ban and had to shed 10 stone in weight.

After two routine wins, the 30-year-old challenged unbeaten American Deontay Wilder for the WBC belt and nearly pulled off a stunning victory.

In one of the most thrilling heavyweight contests for years, Fury was floored in the ninth round and brutally dropped in the 12th, but somehow regained his feet to see out the fight. It was scored a draw, with many experts ringside believing the Briton was unlucky not to get the decision.