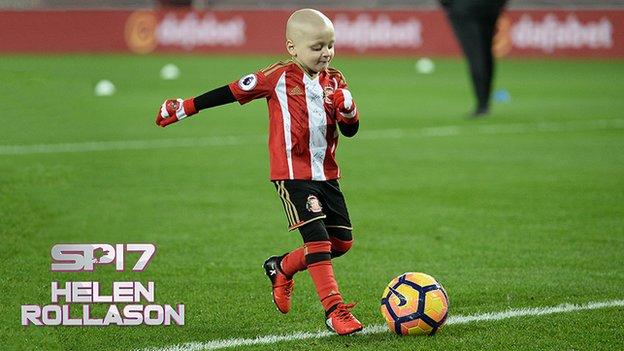 Bradley Lowery, the boy whose bravery touched the hearts of many people, will be honoured at Sunday's BBC Sports Personality of the Year show.

The Sunderland fan and club mascot, who died aged six from a rare form of cancer, has been named the winner of the Helen Rollason Award.

The award, for achievement in the face of adversity, is in memory of the BBC presenter who died of cancer in 1999.

It will be presented to Bradley's parents, Gemma and Carl, in Liverpool.

Bradley was diagnosed with neuroblastoma - a rare type of cancer - when he was 18 months old.

But his positive attitude and cheery smile won him admirers across the world and he became "best mates" with Sunderland's former striker Jermain Defoe.

Well-wishers raised more than £700,000 last year to pay for him to be given antibody treatment in New York, but medics then found his cancer had grown and his family was informed his illness was terminal.

After his death in July 2017, Bradley's parents, who are from Blackhall Colliery, County Durham, said: "He was our little superhero and put the biggest fight up but he was needed elsewhere."

Bournemouth striker Defoe said: "Every time I saw him was a special feeling. He was my best friend."

Bradley became known worldwide following an appeal that led to him receiving 250,000 Christmas cards from countries as far away as Australia and New Zealand.

In December 2016, he met England manager Gareth Southgate and Match of the Day pundit Gary Lineker at the BBC Sports Personality of the Year event in Birmingham.

Bradley then won the programme's December goal of the month award after he took a penalty before Sunderland's game against Chelsea.

He also appeared as a mascot for Everton, with the club donating £200,000 to the Bradley Lowery Foundation set up in his honour, and was visited in hospital by a number of Sunderland players.

A dream came true in March when he was mascot for the England team at Wembley Stadium before a World Cup qualifier where Defoe scored in a 2-0 win over Lithuania.

He was also given honorary 41st place in the racecard for the Grand National at Aintree in April.