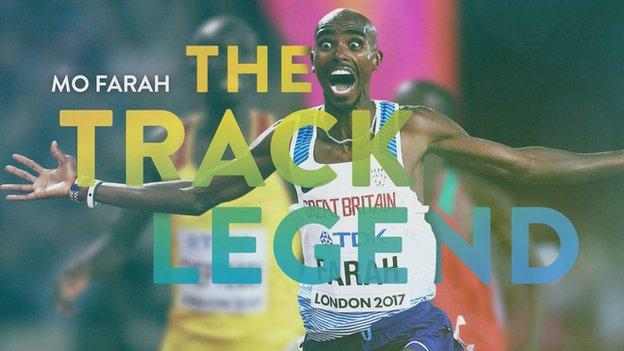 We are showcasing each of the 12 contenders in the run-up to the Sports Personality of the Year award on 17 December. Today - Sir Mo Farah.

Stormed to his third consecutive world 10,000m gold despite almost falling twice late in the race in London in August.

Also won 5,000m silver at the Worlds, missing out on a fifth major championships distance double in a row. Won the final track race of his career - over the same distance at a Diamond League event in Zurich - and will now concentrate on road races.

The Somali-born Londoner, a four-time Olympic champion, received a knighthood from the Queen at Buckingham Palace in November.

"He was desperate to be successful. He left the UK behind to train in America, and showed courage and bravery.

"Mo has been ruthless in his execution, fast, strong and hard-working. He just loves being on that rostrum. He's a fierce competitor - his training, preparation and application is second to none. He is the ultimate winning machine.

"When you look at the record books, he is right up there. For my money he is the greatest distance runner of all time. He's been a joy to be close to and watch." 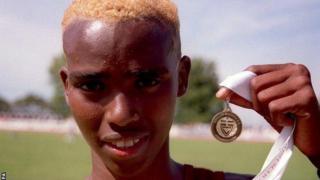 After moving to England aged eight to join his father Mukhtar, the young Farah's talent was soon spotted (1/6)

Developed an early talent for running - finishing ninth in the English schools cross-country championship at 13, and winning the race the following year.

Has since won, and retained, Olympic titles at 5,000m and 10,000m. He is a triple world champion over both distances.

With 10 major global titles, he is the world's most successful distance runner, and has won the Great North Run half marathon a record four consecutive times.

What he said: "It's been a long journey but it's been incredible."

Mozam: It would be a travesty if Sir @Mo_Farah didn't win SPOTY. Icon. Hero. Legend

Athletics offers the widest range of choice of any sport as its various disciplines provide the opportunity to throw, run or jump.

Visit the Get Inspired website to find out more on how to get into athletics.

This article was originally published on 4 December, 2017.