Andy Murray has been voted the BBC Sports Personality of the Year for a record third time.

Murray, the 2013 and 2015 winner, took Olympic gold, claimed his second Wimbledon title and became tennis' world number one in a remarkable 2016.

"It's been a great year for British sport and I am so proud to have been a part of it," said 29-year-old Murray as he accepted the award from Miami.

A landmark year for Murray

In front of a 12,000-strong audience at Birmingham's Genting Arena, Murray accepted the award via video-link from Florida, where he is preparing for the 2017 season.

As he took the prize from former British boxing world champion Lennox Lewis and gathered members of his training team around him, he added: "I'd like to thank everyone who voted - I really appreciate your support."

Brownlee, 28, became the first man to retain the Olympic triathlon title at Rio 2016, finishing ahead of brother Jonny, who claimed the silver.

The Yorkshireman later made headlines across the world when he selflessly helped his exhausted brother over the line in a dramatic end to the Triathlon World Series in Mexico.

In his acceptance speech, Scot Murray said: "I'd also like to thank my family. I think my mum is in the crowd there [in Birmingham]. I'd like to thank my dad as as well, who just got married 10 days ago. I miss you guys.

"A huge thanks to my wife and my daughter - she won't know what this means yet, but maybe in a few years she will.

"Actually, I've got a bone to pick with my wife because about an hour ago she told me she'd voted for Nick Skelton. Not smart from her with Christmas coming up."

Skelton was asked whether he was aware Murray's wife had voted for him, and responded: "I'm very pleased with her actually. But she didn't vote enough times." 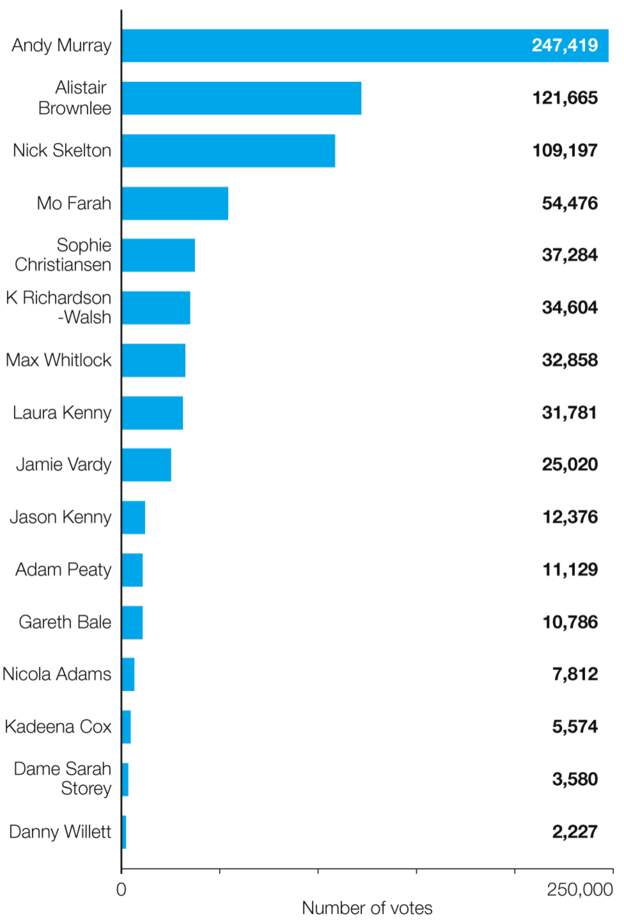 Young Sports Personality of the Year: Ellie Robinson: the Swimmer claimed gold in the S6 50m butterfly final with a Games record at the Rio Paralympics, aged 15.

Team of the Year: Leicester City: the Foxes stunned the world with their shock Premier League triumph last season.

Overseas Sports Personality of the Year: Simone Biles: the 19-year-old American broke new ground with a series of dazzling routines as she secured four gold medals at the Rio Olympics.

Sport's Unsung Hero: Boxing club founder Marcellus Baz provides free classes to hundreds of young people at his Nottingham School of Boxing, with some even dreaming of reaching the Olympics.

Helen Rollason: Ben Smith: the charity runner completed 401 marathons in 401 days after battling back from injury to pass his fundraising target of £250,000. 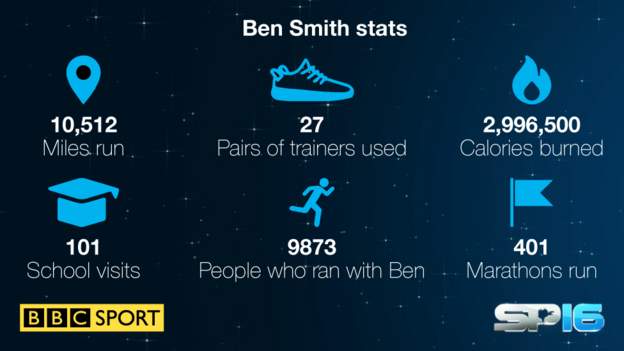 Your reaction on #SPOTY

Mark Haggan: So many fantastic British sport stars this year who have done incredible things. Amazing to see.

Stu: Well done Andy Murray never thought I'd see the day where we had a British world no1, Wimbledon winner & gold medal winner.

Andy Murray's never worried what people thought of him and he's become one of the most popular sportsmen in the country.

Andy has continued to strive and something has switched in him. Now he is the hunted, rather than the hunter, defending that number one spot.

The rivalry between Murray and Djokovic is phenomenal and I cannot wait to see how it develops in 2017.

It will be interesting to see how he responds to that but he looks relaxed. I expect a reaction from Djokovic as he will not like this one bit.

But I feel as if Murray can go on and dominate quite significantly in 2017.

'Tennis isn't the most important thing'

Murray began the year by reaching the Australian Open final, but lost to Novak Djokovic in straight sets.

Murray was beaten again by Djokovic at the French Open final in early June, but within two weeks he was crowned Wimbledon champion for a second time, adding to his 2013 title, when he ended Britain's 77-year wait for a men's champion.

In August he defended his men's singles Olympic title with victory over Argentina's Juan Martin del Potro in an epic final in Brazil.

And another win over Djokovic at the ATP World Tour Finals - Murray's first title at the season-ending event - ensured he would end 2016 as world number one.

Speaking during Sunday's ceremony in Birmingham, before he won the award, Murray said 2016 had been "the best year in my career".

Asked about how becoming a father had affected him, he added: "I have loved it. It was a challenge obviously and it made me realise tennis isn't the most important thing.

"Away from the court I am a lot happier now I'm not thinking about tennis all the time as I used to and that's helped me on the court."

'The trophy's a bit broken'

"The trophy is a bit broken. It's kind of stuck down with tape where the top bit of the camera is," he said.

"They didn't tell me how it got broken, and to hold it close to my body. After the problems me and Lennox had the last time [a botched handover when he was third in 2012], I listened to them."

798 comments
Back to top
unknown