Andy Murray says he is determined to keep improving so he remains world number one after winning BBC Sports Personality of the Year for a record third time.

Murray collected the main award from Miami where he is training for 2017.

"It's possible everything doesn't go perfectly next year and I need to be prepared," the 29-year-old said.

"I know staying at the top is a really difficult thing to do. I'm not taking anything for granted."

He added: "I'm sure Novak [Djokovic] will be wanting to get back to the top spot but it's taken me so long to get here that I want to stay there as long as I can, and that's why I'm over here now.

"I'm working on my game and trying to get myself in shape so I can start 2017 as best as possible."

Murray, the 2013 and 2015 Sports Personality winner, took Olympic gold, claimed his second Wimbledon title and became tennis' world number one in a remarkable 2016.

A landmark year for Murray

In his acceptance speech, Scot Murray said: "I'd like to thank everyone who voted. I really appreciate your support. And I'd like to thank my team - they make a lot of sacrifices for me; they're away form their family at times of the year like this."

He received the award from British boxing world champion Lennox Lewis and later said the replica trophy he was presented with had been damaged. He will be presented with the actual trophy at a later date.

He added: "It's kind of stuck down with tape where the top bit of the camera is.

"They didn't tell me how it got broken, and to hold it close to my body. After the problems me and Lennox had the last time [a botched handover when he was third in 2012], I listened to them."

The Yorkshireman, who became the first man to retain the Olympic triathlon title at Rio 2016, added: "In tennis, which is very competitive, his consistency - especially this year - has been very impressive.

"He focuses and does his best in the Olympics and that shows someone who is a real, genuine sportsman."

Third-placed Skelton, 58, who became Britain's second oldest Olympic gold medallist at August's Games, said of Murray: "He's had a great year and worked hard to get where he is. To win it three times, you've got to be pretty good, haven't you?"

Record-breaking Olympic swimmer Michael Phelps, won the Lifetime Achievement award and also had some words of praise for Murray.

"Watching what he's done on the court is insane," the 23-time Olympic gold medallist said. "He's really shown he's the best player in the world and it's been fun to watch him on his mission."

Leicester City manager Claudio Ranieri won Coach of the Year and said: "He's amazing. He deserved to win. He's a champion and I hope he can repeat his success this season."

There was a very special guest among the 12,000-strong audience in Birmingham - terminally ill five-year-old Sunderland fan Bradley Lowery.

Bradley scored a penalty for his beloved Black Cats in the warm-up against Chelsea on Tuesday night and there is a growing social media campaign for it to be named the official Premier League Goal of the Month.

His mum Gemma said they had been surprised and delighted to be invited.

"Normal people like us don't usually get a chance to go to things like this," she said.

"It's been crazy the last few weeks. The whole country has come together."

Did Leicester miss their cue?

But when they were called up to collect the prize, there seemed to be a bit of confusion. Striker Jamie Vardy watched on with a grin as Ranieri seemed to be expecting somebody else to get up first.

When they eventually did take to the stage, captain Wes Morgan said: "We've not done it the easy way but we did it in the end and it just comes down to the unique set of lads we've got."

Is Kim in the bad books?

"I've got a bone to pick with my wife because about an hour ago she told me she'd voted for Nick Skelton. Not smart from her with Christmas coming up," he said.

Skelton was asked whether he was aware Murray's wife had voted for him, and responded: "I'm very pleased with her actually. But she didn't vote enough times."

Murray later told BBC Radio 5 live: "I'm hoping she was joking! I'll speak to her when I'm off air and find out definitely.

"It's my last day off before Christmas and I'm doing my Christmas shopping tonight so if she gives me the wrong answer she's not getting anything."

When the TV magic was shattered

"Hey Ross, this is Lutalo Muhammad. I'm a taekwondo athlete..."

The problem comes when he forgets how a phone actually works...

Muhammad was taking part in Get Inspired's #BigThankYou - which recognises sport's unsung heroes.

How many did you get in the SPOTY bingo?

By our reckoning we came close to a full house. There was everything but number one. Thankfully no emergency plasters were required (unlike last year!). 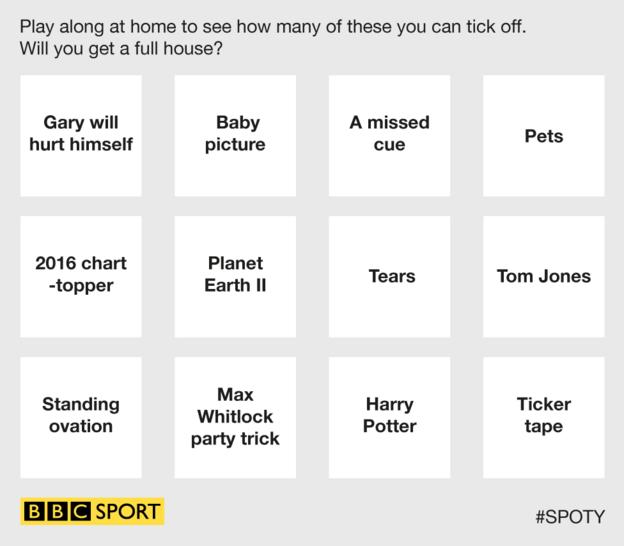