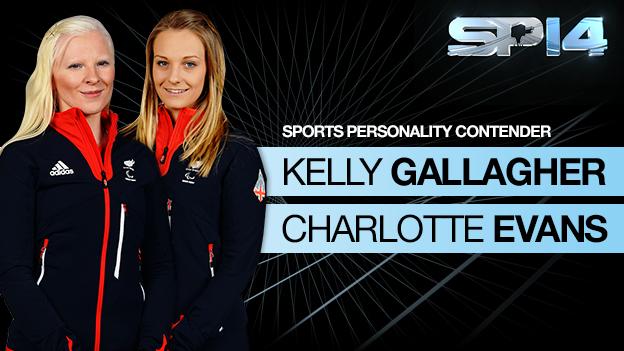 Gallagher and Evans are the latest in our series of profiles in the run-up to the BBC Sports Personality of the Year award on 14 December, as we focus on one of the 10 shortlisted contenders each day.

Dame Mary Peters, who brought Olympic pentathlon gold back to Northern Ireland in 1972, gives her thoughts on 29-year-old Gallagher and Evans, 23.

"It's amazing what they have achieved," said Dame Mary, whose charity has supported Gallagher, who has oculocutaneous albinism, a condition that affects the pigment in her hair, skin and eyes.

"She and Charlotte are an absolute team - they are such good pals. Kelly wouldn't be able to ski in her own right if it wasn't for Charlotte and what they have been able to achieve together is terrific.

"I met Kelly in Northern Ireland when she was about 12 - this wee girl full of life, vigour and enthusiasm - and just loved her. She had no interest in sport at that stage.

"After she lost her sight there were very few sports she could take up, and to travel at those speeds is quite amazing when you can't see what you're doing.

"Kelly comes from Northern Ireland where we have little snow. It just happened she was on a holiday with her mum in Andorra at the age of 17 and said that she wanted to do some skiing.

"I did a sponsored charity walk with her once, and it was one of the best hours of life I have ever spent. She wants to give back and wants to continue in sport - and she has to strike the balance between being a social animal and a world-class athlete."