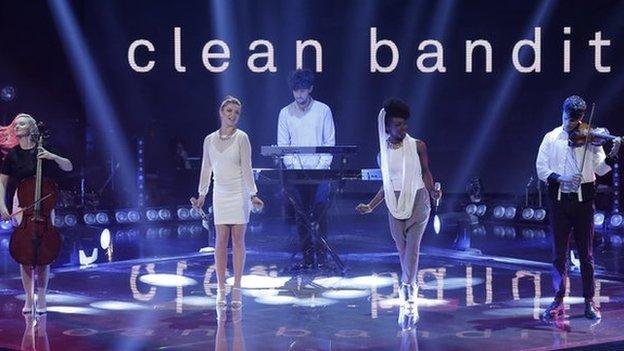 One of the biggest music acts of 2014, Clean Bandit, will take the stage at BBC Sports Personality of the Year in Glasgow on Sunday 14 December.

They will be joined by singer Jess Glynne as they play in front of the 12,000 arena crowd and millions watching live on BBC One.

The quartet of Jack and Luke Patterson, Grace Chatto and Milan Neil Amin-Smith will perform their single Rather Be.

It spent four weeks at number one and has been viewed 181m times on YouTube.

Cellist Chatto said: "We are so excited. I have no idea who will win but we can't wait to attend this celebration of a completely different world to music, and meet all the sportsmen and women."

Also performing at the awards show will be violinist Nicola Benedetti, who will appear with the Scottish Symphony Orchestra. Meanwhile, Glasgow band Simple Minds will open the show as it launches live from their home town, which also hosted the Commonwealth Games this summer.

The top 10 contenders for the main award have been announced and the winner will be voted for live on the night.

More tickets have been made available for the show and can be purchased online at www.thessehydro.com, by calling the ticket hotline on 0844 395 4000 or in person from the main box office in the Scottish Exhibition and Conference Centre.

The ticket office is open Monday to Saturday 9am-6pm. Calls cost up to 5p/min from most landlines (an additional connection fee may also apply). Calls from mobiles may cost considerably more.