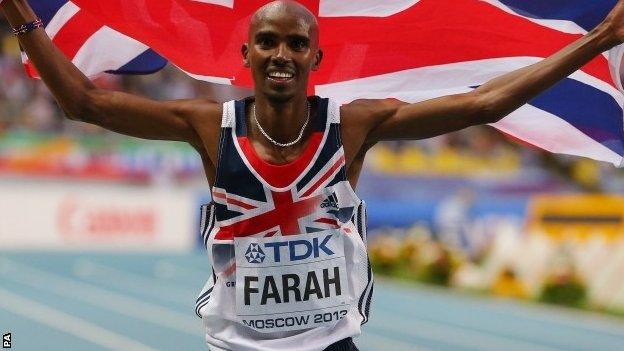 During the countdown to the 60th BBC Sports Personality of the Year award on Sunday, 15 December, we will be looking at each of the 10 shortlisted contenders.

Mo Farah's dreams of repeating his Olympic distance double success at the 2013 World Athletics Championships were realised in spectacular style in August.

The 30-year-old once again proved he was the best male athlete over 5,000m and 10,000m with two gutsy and thrilling displays at Moscow's Luzhniki Stadium.

"For my money he is the greatest we've ever had," said BBC commentator Brendan Foster, who won bronze in the 10,000m at the 1976 Olympics.

"Farah has always had challengers and he's always been able to hold them off.

"We are enjoying great times in distance running. Now we have a man who's inspiring the next generation of runners."

The 10,000m was Farah's first target. It was a battle of stamina and wits - with his main rival Ethiopia's Ibrahim Jeilan, who overhauled the Briton metres from the line in their previous world showdown at Daegu 2011 two years earlier

The race for gold was once again decided over the final strides, but this time Farah held off Jeilan with 150m remaining for his second world title.

A few days later, Farah was faced with a harder and faster race - the 5,000m final. But the Arsenal fan found the strength in the final 40m to move away from Kenyan Isiah Kiplangat Koech and clinch yet another memorable victory.

The British male athlete of the year also showed his versatility over the distances this year. In July, he broke Steve Cram's 28-year 1500m British record at the Diamond League in Monaco.

By doing so, he became the sixth fastest man over the distance and the European record holder with a time of three minutes and 28.81 seconds.

And he came close to winning September's Great North Run, but was pipped by Ethiopian legend Kenenisa Bekele, who was the last man before Farah to do the 5,000m and 10,000m 'double-double'.

Farah was the first person to beat ITV's The Cube and won £250,000 for charity

Somalia-born Farah's path to greatness began after he arrived in England at the age of eight, when his athletic prowess was recognised on the football pitch.

He was convinced to pursue a career in athletics and went on to win school titles before landing the European junior 5,000m crown in 2001.

Farah took his first major gold when he clinched the 3,000m at the 2009 European Indoor Championships before following that up with the 5,000m and 10,000m crowns at the outdoor equivalent in Barcelona, the following year.

But it was at London 2012, when Farah became a big name not only in Britain but across the world. In front of passionate capacity crowds at the Olympic Stadium, he produced two stirring displays to win the 10,000m and 5,000m.

Farah has now done the 'double-double', but he remains ambitious and plans to run in the 2014 London Marathon - having raced half of it this year.