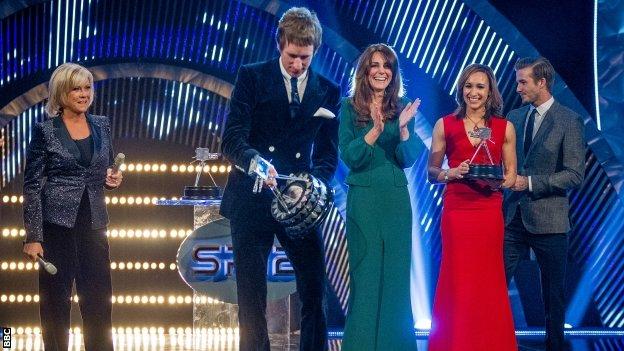 Regrettably we're announcing that Sue Barker is standing down from her presenting duties on Sports Personality of the Year. I have been very lucky to have worked with Sue - or 'Susan' as Bradley Wiggins affectionately referred to her during last year's programme - for nearly 20 years.

Sue now wants to concentrate on her many other commitments for the BBC including Question of Sport, the Winter Olympics and Wimbledon. She'll also continue to do special projects with us, like our recent Andy Murray documentary.

Nobody other than Sue could have reassured a very private sports star like Andy to open up for the first time in his life and handle so sympathetically his recollection of the tragic Dunblane shootings. And it was great to see Sue congratulating Andy on Centre Court just 12 months after consoling our tearful future champion. I look forward to much more of that as Sue continues her broadcasting reign over Wimbledon.

I know first-hand the weeks of meticulous researching that Sue does for Sports Personality of the Year, including ringing round all the agents and sports stars to discuss potential questions. Sue never just turns up without days of planning. It is because of the amount of work that she puts into everything that she has decided to scale back her commitments.

I've spent many hours trying to convince her to change her mind and I'm personally gutted that she won't be presenting our 60th programme, but I fully respect Sue wants to go out on the massive high of last year's 2012 extravaganza.

Sue was instrumental when I took over as editor in taking the event out to arenas with large public audiences. As Des Lynam once put it, it is the best laxative known to mankind presenting Sports Personality of the Year in front of the greatest sports stars in the world - let alone in front of 15,000 people.

For the first arena show in Birmingham in 2006 all of the production team were extremely nervous; we would never have got through it without Sue. She was there for days beforehand for extra rehearsals and stayed into the early hours of the morning with the team getting things absolutely right.

There have been many hairy moments along the way too, such as in 2009 when the severe bad weather almost brought Sports Personality of the Year to a standstill. We were determined to keep the show on the road, but one of our presenters was unable to get her car off the drive because of the snow.

Nothing was going to prevent Sue from getting there. With husband Lance's support, they managed to get hold of a local snow plough and then - via a tractor or two - were able somehow to get to the nearest motorway and eventually made it to the arena in time - completely unflustered. Nothing surprises me with Sue.

My first job in TV was working on Question of Sport for the legendary David Coleman back in the 1990s. It was a real baptism of fire as I was straight out of university, wet behind the ears. David taught me as a young researcher everything I needed to know about professionalism and attention to detail.

He was revered by everyone. So who could ever possibly step into his shoes? Well, David knew what he was doing when he passed on the baton to Sue. The greatest tribute I can make to Sue is that she is, and always has been, as equally professional as David. And David won't mind me saying a lot easier to work for too!

Working with presenters you often have the unenviable job of often asking them to do things that you know they really won't like and won't want to do. With Sue, however, nothing has ever been a problem and she has never let me or the rest of the BBC Sport family down in 20 years.

I can remember once we were filming Question of Sport and Ally McCoist, who was always notoriously late, sent me a text saying he was at just the airport and he would only be a few minutes. He said to send on Sue to warm up the 400-strong studio audience. Typically Ally forgot to mention he was at Glasgow Airport and not Manchester - Sue filled in like a trouper for over two hours!

During Sports Personality of the Year 2008 we filmed some of the great Smithy sketches for Sport Relief. As well as asking Sue to present one of the most challenging and high-profile shows on TV - which it certainly is - I also asked her to front the Smithy sketch in the immediate 20 minutes beforehand. It included her snogging Smithy, aka James Corden, and him completely messing up her hair and make-up!

To me it shows that as well as the serious and professional part of the job, Sue can do the fun stuff as good as anyone. It is why I believe she is one the most loved personalities on TV today.

You don't win a Grand Slam title without being an extraordinary person, and the passion, dedication and talent that Sue needed as one of Britain's great sports stars has been transferred effortlessly into her broadcasting career.