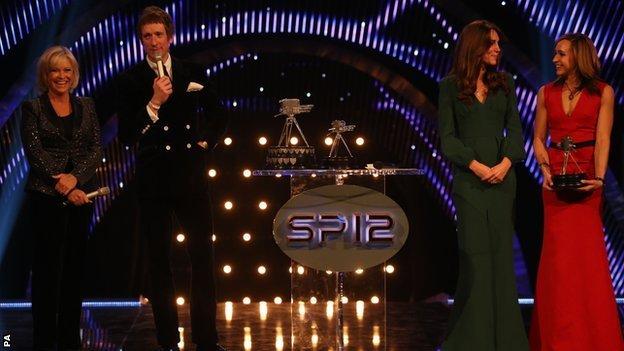 It will be awfully hard to let this sporting year go, but perhaps now - even with a full fortnight left on the calendar - we should agree to say our fond farewells.

With the coronation of Bradley Wiggins as BBC Sports Personality of the Year, at the biggest version of the oldest show in its most competitive year, we have both the perfect bookend and the sort of celebratory wake that even the punchiest office party will struggle to match.

Has there been a year like it? Wise old heads will caution against revisionism and hyperbole, let alone bleary-eyed assessments following late-night celebrations, but wise old heads are for once all in agreement with young guns and middle ages.

How could it have been better? 2012 was the year of Super Saturday, of the Miracle at Medinah, of a Weirwolf on the prowl and the fastest moving set of sideburns since Elvis Presley.

Team of the Year: GB Olympic and Paralympic squads

Coach of the Year: Dave Brailsford

There was the one-off wonder of Lionel Messi and the repeat marvel of Usain's sprint double, a maiden British winner of the Tour de France and the first Grand Slam victory for several generations in the form of Andy Murray's late-night triumph in New York.

In those wonderful late summer months, Great Britain won more Olympic and Paralympic medals than in any time in its history. In one single day it secured more golds than in 16 other entire Games. Britons bagged medals standing and sitting, punching and kicking, swimming, biking and running and sometimes all three in succession.

You could go on, and lots of us have done. There was no more enjoyable argument to have than picking your favourite three sporting moments, no more difficult decision than selecting your woman or man of the year.

All these cold months later, some of those events already feel like an improbable ancient history, if not a hallucinogenic fiction dreamt up to carry us through a wet and austere 12 months with very little else to recommend them.

To be reminded that they all actually took place as you remembered was one of the pleasures that Sports Personality provided. So too was repeated realisation of how likeable are the 12 contenders chosen to shortlist the medal rush and trophy haul.

Some of them were known before 2012. Others came to prominence, while others too showed a side and a talent that only they knew existed. With all you watched and listened and thought, aren't we lucky to have them?

With the new heroes came new narratives. Danny Boyle's Olympics opening ceremony offered a vision of modern Britain that felt simultaneously fresh and familiar to every one of us; over the following 16 days, the country's athletes made that perception flesh, the experience of watching them creating for the country a series of mutual memories to celebrate and cherish.

It was the year the sporting world came to Britain, and Britain - for delightfully long periods - colonised it in the nicest possible way.

Rowers ruled the waves. Cyclists bossed the boards. When stars from elsewhere did come out on top, spectators delighted to be there when it happened shouted themselves giddy regardless.

Britain has always been a sport-obsessed nation, but it hasn't always had the national success to match the national passion. In 2012, the perfect balance was finally found

The final accolade of Wiggins's golden year was preceded by honours that equally summarised the sporting months we have gloried in and gawped at.

Usain Bolt once again made the impossible look commonplace. Even if Messi and world-record breaking 800m champion David Rudisha had seasons like few before them, it is Bolt who entertains and amazes like no-one else in sport: an overseas personality who lit up London and every other track he set spike on.

Dave Brailsford, as coach of the year, was the driving force behind both Team Sky's unprecedented domination of the Tour (and Paris-Nice, the Tour of Romandie and Criterium du Dauphine) and the track team that dominated the velodrome in Stratford just as it had in Beijing four years before.

Team of the year, in any other year, would have gone to Jose-Maria Olazabal's Ryder Cup renaissance men. That the voting panel decided unanimously to give it instead to Team GB and Paralympic GB not only cleared the old clause excluding those two but reflected the impact both made on the country that cheered them on.

Many moments this year brought tears to eyes and lumps to throats. In seeing once again the slow-motion of Gemma Gibbons's maternal tribute, even the resolute were reduced to rubble; in listening again to the story of Helen Rollason Award winner Martine Wright, the woman who represented GB at the Paralympics seven years after losing her legs in the London bombings, all were silent and stirred.

Should we be sad that 2012 is over, fearful that it will never be this good again? Lord Coe, winner of the Lifetime Achievement Award, spoke eloquently afterwards of how Olympians are capable of yet more.

Other sports quiet this year can come to the party, other contests like the Lions tour and Ashes home and away step in to fill the void. Others would rather cherish 2012 for its unique charms rather than wish to forever play catch-up.

Britain has always been a sport-obsessed nation, but it hasn't always had the national success to match the national passion. In 2012, the perfect balance was finally found.

The final words, fittingly, should go to Sir Wiggo, a personality big enough for the biggest year of all: "It was incredible. I will never forget it."